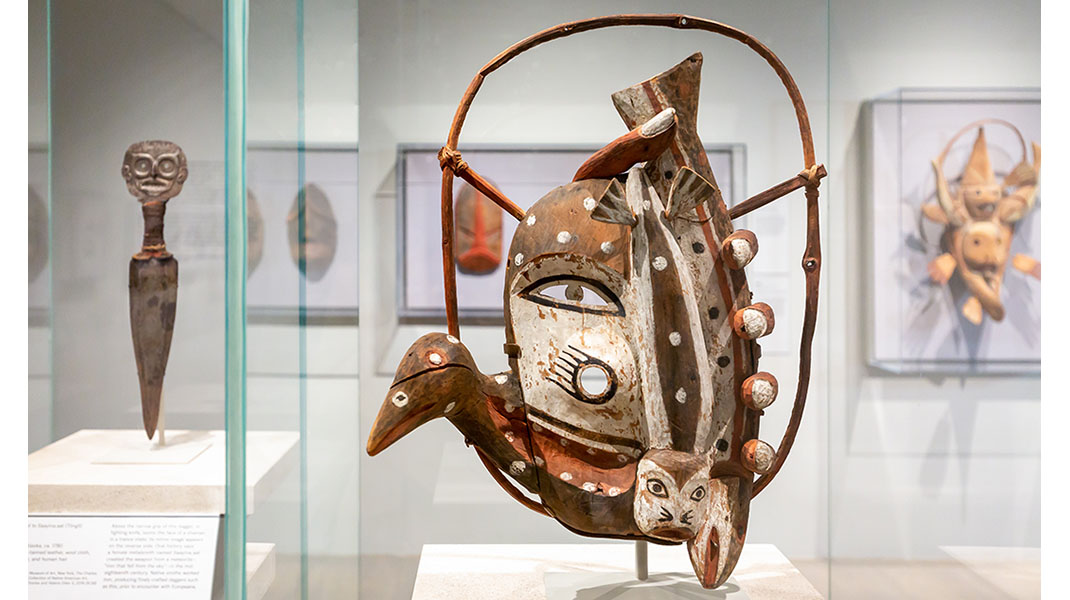 “The achievement of historical Native artists from across the United States and Canada is reflected in this installation of 116 works. More than fifty Indigenous groups are represented, as well as nearly all major historical Native American aesthetic forms: painting, drawing, sculpture, textiles, quill and bead embroidery, basketry, and ceramics. The works reveal the complexity, vibrancy, and variation of Native life and offer new narratives of America’s past.

Most of the objects—made to be worn; to nourish; to hunt, defend, and protect; to heal; to cradle the young; and to invoke the spirits—were created in the eighteenth, nineteenth, and early twentieth centuries against the backdrop of Euro-American colonialism. They are organized into seven geographical regions: Woodlands, Plains, Plateau, California and Great Basin, Southwest, Northwest Coast, and Arctic.

This long-term installation consists of promised gifts, donations, and loans from the pioneering collectors Charles and Valerie Diker. Their belief in the potential of these objects to broaden historical, cultural, and aesthetic understanding inspired their generosity. The presentation marks the first significant display of Native art in the American Wing, established in 1924.” — Introductory Wall Text

Sylvia Yount, the Lawrence A. Fleischman Curator in Charge of the American Wing, stated: “We are committed to exploring thoughtfully and sensitively the entangled histories of contact and colonization from both Native and Euro-American perspectives. The Met takes seriously its curatorial responsibility to share with our broad audiences—in a variety of displays and contexts—the cultural endurance and creative continuity of Indigenous American artists.”