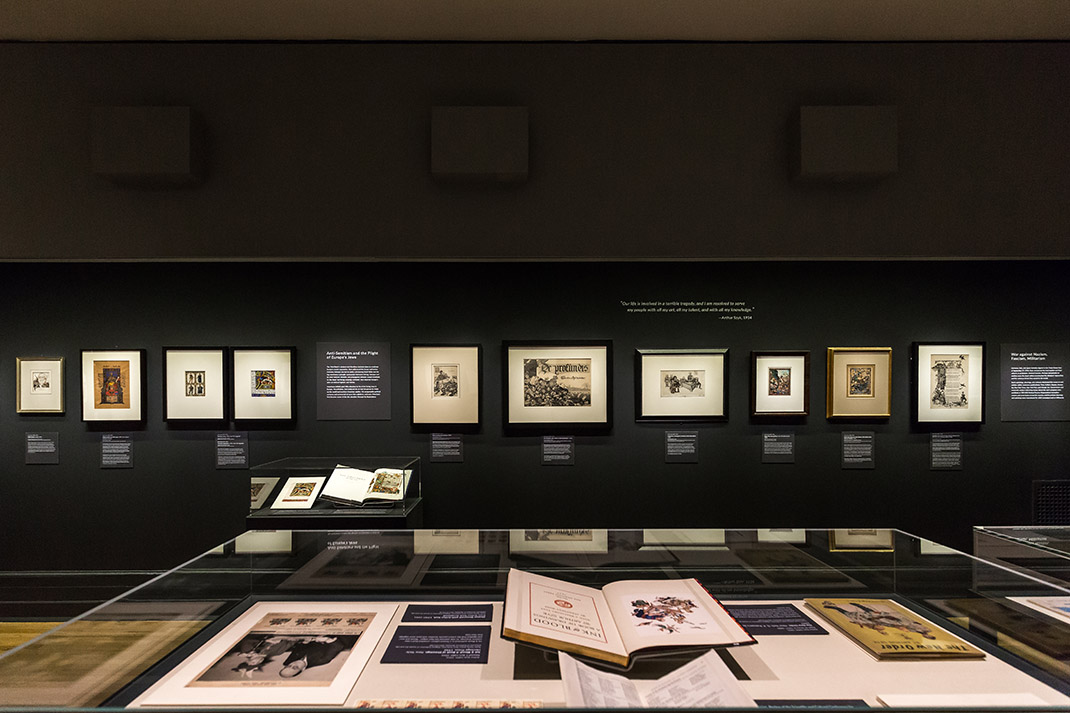 “Arthur Szyk’s art transcends time and place. Inspired by medieval illuminated manuscripts, the works he created during and after World War II capture the savagery of Nazism, the dangers of totalitarianism, and the pathos of American racism. Although small in scale, Szyk’s forceful and richly detailed illustrations address the most urgent human crises of the mid-twentieth century.

Trained in his native Poland and in Paris, Szyk (1894-1951) became widely known as a commercial artist, political satirist, and advocate for human rights. His drawings appeared regularly in British and American newspapers and magazines, and his paintings were exhibited throughout Europe, Canada, and the United States. Szyk illustrated over thirty books, and created moving, topical artwork for relief organization pamphlets, public service announcements, military posters, and corporate advertising campaigns.

Increasing anti-Semitism in Europe and the plight of Jews living under the Third Reich mobilized Szyk to aim his artistry at the Nazis. Using his illustrations as “weapons of war,” he fought against the Axis powers—Germany, Italy, and Japan—with pencils, paints, and inks. His passion for social justice also fed his observations about the incongruities of modern life. His later works exposed pervasive undercurrents of American racism in the US and championed the establishment of the State of Israel. In the midst of the divisive political and social debates of our own time, Szyk’s art resonates as readily today as it did during the 1940s.” — Introductory Wall Text

“Our life is involved in a terrible tragedy, and I am resolved to serve my people with all my art, all my talent, and with all my knowledge.” —  Arthur Szyk, 1934

” I try to accentuate all the vileness, and bestiality of the enemy.” —  Arthur Szyk, 1942