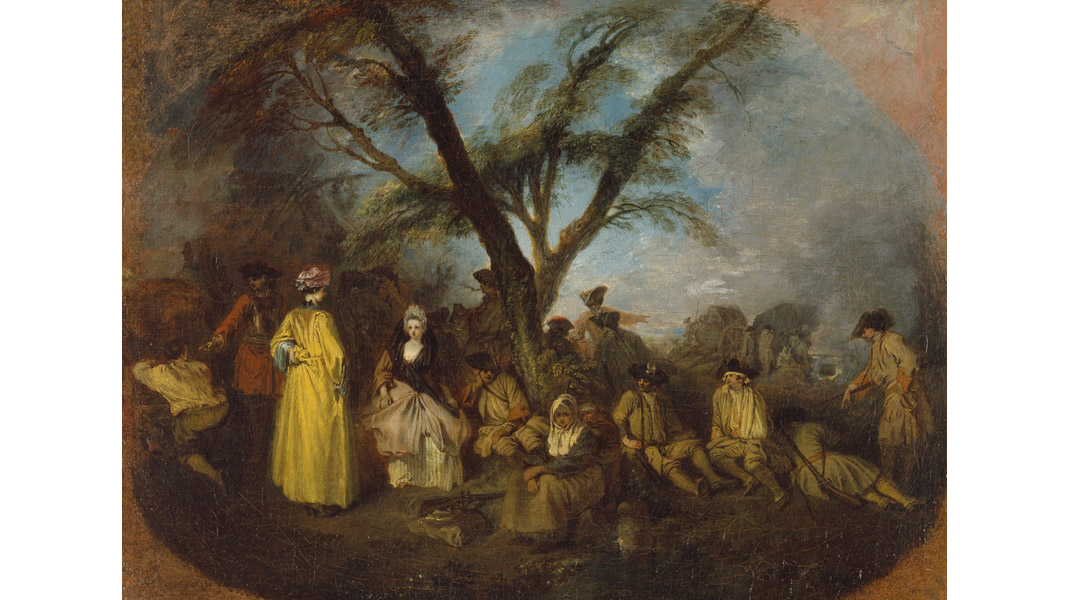 “Best known for his images of amorous aristocrats and melancholy actors, Jean-Antoine Watteau (1684-1721) ventured into military subjects early in his short career, producing about a dozen paintings and a number of drawings between about 1709 and 1715. Working during the War of the Spanish Succession, Watteau had no interest in capturing the turbulence of battle or exalting the triumphs of generals and kings. Instead, he focused on the prosaic aspects of a soldier’s life—marches, halts, and encampments. These themes were inspired by seventeenth-century Dutch and Flemish precedents, but Watteau’s efforts are set apart by their intimacy and humanity. More than any previous artist, he portrayed soldiers as individuals endowed with inner lives.

Watteau’s intimate vision of war is inseparable from his unusual working methods. Unlike most of his contemporaries, Watteau did not proceed methodically from compositional sketches, studies, and full-scale models to the final painting. Instead, he began by drawing soldiers from life, capturing them “off duty,” unconstrained by the discipline of drills and battle. These drawings, executed without a specific end in mind, provided him with a stock of figures that he would later arrange on a background he had already prepared. As a result, even as the figures interact, the connections between them are never entirely resolved. Their gazes do not seem to meet, and their gestures are often enigmatic. The uneasy social commerce of Watteau’s paintings lends them a dreamlike ambiguity and psychological complexity new in genre scenes of military life.” — Introductory Wall Text