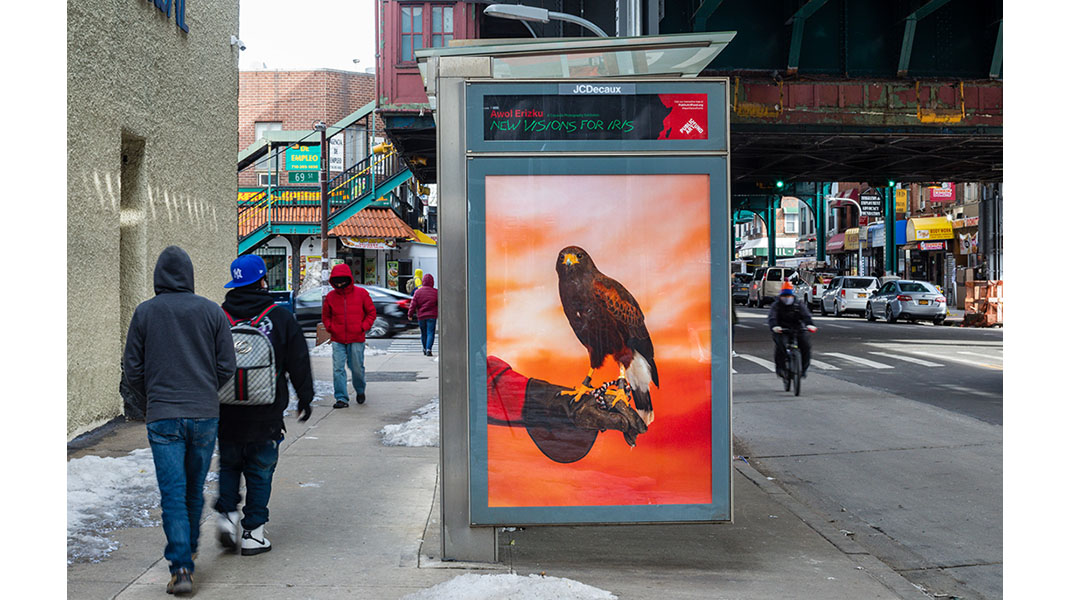 “Public Art Fund presents New Visions for Iris, a 350-site photography exhibition by multidisciplinary artist Awol Erizku. On view at 200 JCDecaux bus shelters across New York City and 150 in Chicago, this is the first time Public Art Fund stages an exhibition concurrently in these two cities. This body of 13 photographs presents a new visual lexicon that explores the liminal space between imagination, spirituality, and image making, and was inspired by the recent birth of Erizku’s daughter—Iris—as a starting point for future dialogue with her about identity and our challenging times. Comprising still-lifes, portraits, and depictions of birds, the suite of new work challenges the traditional Western canon and alludes to genre painting and pictorial styles in contemporary advertising. Creating visual poems, Erizku imagines an inclusive reinvention of our shared public spaces that challenge the status quo of typical commercial images. New Visions for Iris is Erizku’s first solo public exhibition and will be on view from February 24 through June 20, 2021.” — Public Art Fund

“My image-making process is a reflection of how I encounter the world. It allows me to explore alternate possibilities and novel ways of engaging with the world around me,” says artist Awol Erizku. “These works function as both propositions and questions about what else is in dire need of invigoration, which also come with a great deal of responsibility when displayed in public space. As a father, I think about how to raise a daughter in this world and explain cultural parameters and gray areas; I want my daughter Iris to grow up with these images so they’re the norm for her. With New Visions for Iris I want to reflect a less fixed, rigid, institutional understanding of the spaces we occupy.”

Photographic work as a part of Awol Erizku: New Visions for Iris, an exhibition on 350 JCDecaux bus shelter displays across New York City and Chicago, February 24 to June 20, 2021.