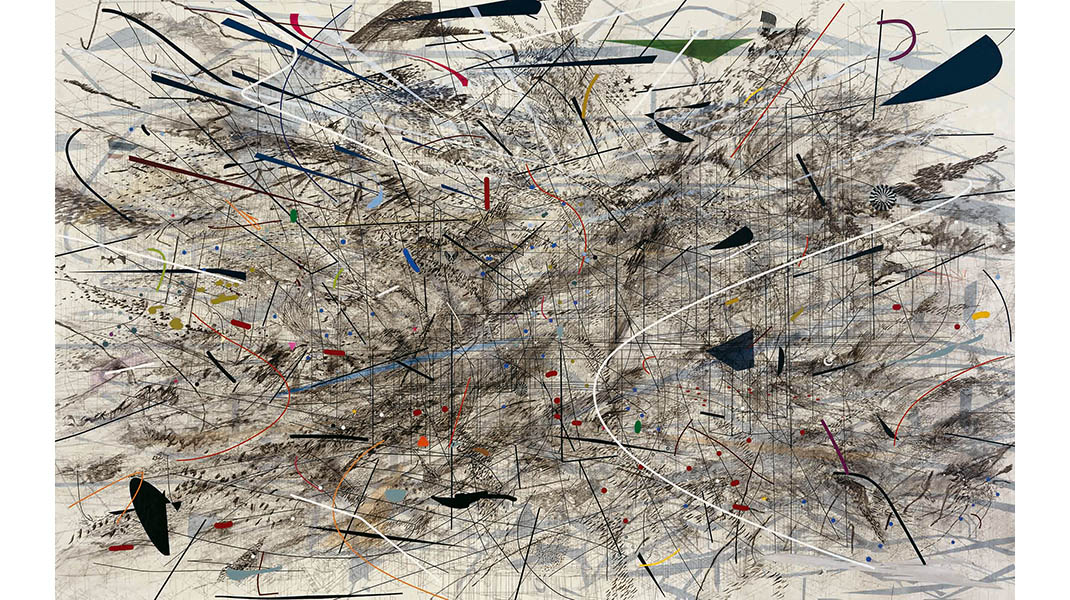 “Co-organized by the Los Angeles County Museum of Art and the Whitney Museum of American Art, Julie Mehretu is a midcareer survey that unites more than seventy paintings and works on paper dating from 1996 to the present, reflecting the breadth of Mehretu’s multilayered practice. Born in Addis Ababa, Ethiopia, in 1970 and based in New York City, Mehretu has created new forms and found unexpected resonances by drawing on the histories of art and human civilization. Her play with scale and technique, as evident in intimate drawings, large canvases, and complex forms of printmaking, will be explored in depth. Filling the Whitney’s entire fifth floor gallery, the exhibition takes advantage of the expansive and open space to create dramatic vistas of Mehretu’s often panoramic paintings. The first-ever comprehensive survey of Mehretu’s career, Julie Mehretu is organized by Christine Y. Kim, curator of contemporary art at LACMA, with Rujeko Hockley, assistant curator at the Whitney.” — Whitney Museum of American Art

“Few artistic encounters are more thrilling than standing close to one of Julie Mehretu’s monumental canvases, enveloped in its fullness, color, forms, and symbolic content. Mehretu’s conviction and mastery of composition and brushwork—along with the sheer energy and full-on commitment of her execution—endow her works with a life force, presence, and presentness,” said Adam D. Weinberg, Alice Pratt Brown Director of the Whitney. “The Whitney Museum is particularly pleased to co-organize this midcareer survey with LACMA, and we are thrilled to continue our longstanding and close relationship with the artist, who has been included in numerous group exhibitions at the Whitney, beginning with the 2004 Biennial.”