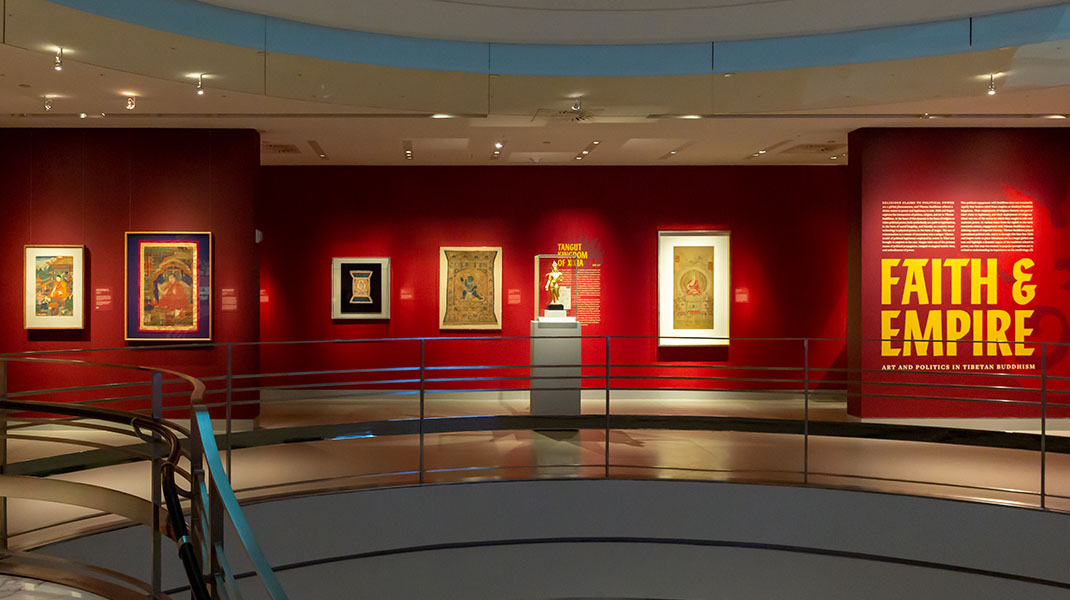 “How do political leaders rise to power? What gives them the right to rule? In some governments today, we imagine power comes from the democratic consent of the people. In other systems, power can manifest through sheer might alone or could be transferred through religious mandate. The force of religion to claim political power is a global phenomenon, and Tibetan Buddhism once offered such divine means to power and legitimacy to rule.

Faith and Empire explores the dynamic historical intersection of politics, religion, and art in Tibetan Buddhism. Through more than 60 objects from the 8th to the 19th century, the exhibition illuminates how Tibetan Buddhism presented a model of universal sacral kingship, whereby consecrated rulers were empowered to expand their realm, aided by the employment of ritual magic. Images were a primary means of political propagation, integral to magical tantric rites and embodiments of its power.

By the 12th century, Tibetan Buddhist masters became renowned across Northern Asia as bestowers of this anointed rule and occult power. Tibetans also used the mechanism of reincarnation as a means of succession, a unique form of political legitimacy that they brought to empires to the east.

Through the lens of Tibetan Buddhism’s potent historic political role in Asia, Faith and Empire seeks to place Himalayan art in a larger global context and shed light on an important but little-known aspect of power in the Tibetan tradition.” — The Rubin Museum of Art

Faith and Empire was curated by Karl Debreczeny.