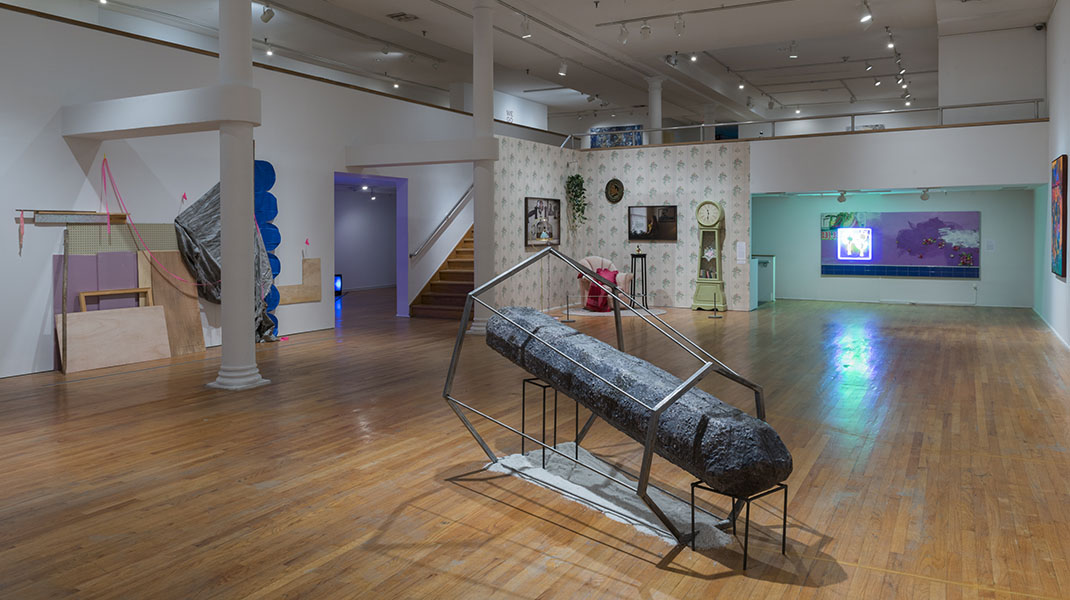 “Fictions is a survey of recent work by nineteen artists who live and work across the United States. The title Fictions refers to both the alternate narratives that artists create and the falsehoods often understood as truth. From the personal to the political and the everyday to the imagined, the exhibition examines the stories that form the foundation of these artists’ practices. In some cases, the artists construct their own truths and mythologies, while others act as witnesses to their lived experiences through their practices. Engaging with a variety of media—including video, photography, painting, drawing, sculpture, and installation—the featured artists seek to investigate the complexities of the contemporary moment, from the prison-industrial complex to race and gender.

Exploring art’s relationship to the concerns of African-American, Latinx, U.S., and global artistic communities, the artists’ sources are as varied as the civil rights movement, recent events, and speculative fiction, a literary genre with futuristic or otherworldly elements and settings. Many incorporate everyday objects into their work, reference urban architecture and economies, or use new media to explore popular culture and Americana. From culinary tradition to religion, what unites these artists is their deep ties to culture, place, and historical context within the diverse environments they inhabit.

Fictions brings together artists from locations around the country, including Georgia, Michigan, North Carolina, and Texas. It also marks the first time that works by any of these artists have been in an exhibition at The Studio Museum in Harlem. Reflecting on concerns at the core of the Studio Museum’s mission, including questions around race, identity, and the continued visibility of artists of African descent, together the works illustrate a sample of the diversity of artistic practice in the United States today.” — Introductory Wall Text

Amy Sherald, The Boy With No Past, 2014. Oil on canvas, 54 × 43 in. Private Collection. Courtesy the artist and Monique Meloche Gallery, Chicago

Maya Stovall, Untitled A, 2017. On view in Fictions, The Studio Museum in Harlem. Photo: Adam Reich