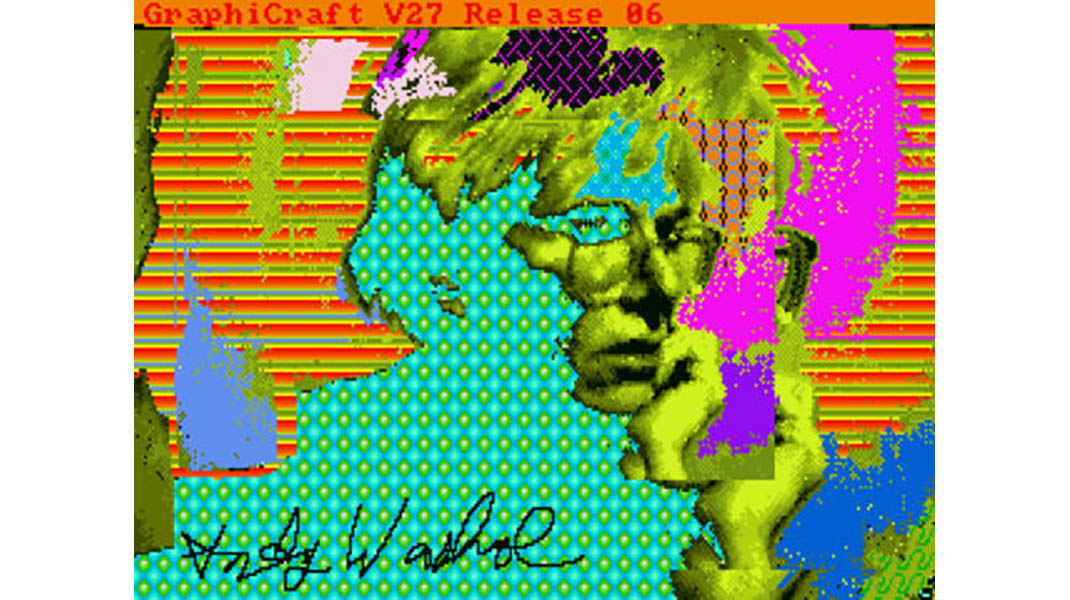 “Warhol’s Amiga experiments were the result of a commission by Commodore International to demonstrate the computer’s graphic arts capabilities. They vary from doodles and camera shots of a desktop, to experimenting with Warhol’s classic images of a banana, Marilyn Monroe, Campbell’s soup, and portraits. One artwork resulted from the series, a portrait of Debbie Harry. This artwork is in The Warhol’s collection, but the other images on the disks had been inaccessible due to their obsolete format, since entering the collection in 1994. Also within the museum’s collection is a letter with numerous handwritten amendments by Warhol’s business manager Fred Hughes, which seems to have served as the contract between Warhol and Commodore International.” — The Andy Warhol Museum

Wrbican states, “The Amiga hardware and Warhol’s experiments with it are one small portion of his extraordinary archives, nearly all of which was gifted to the museum from The Andy Warhol Foundation for the Visual Arts, Inc. In the images, we see a mature artist who had spent about 50 years developing a specific hand-to- eye coordination now suddenly grappling with the bizarre new sensation of a mouse in his palm held several inches from the screen. No doubt he resisted the urge to physically touch the screen – it had to be enormously frustrating, but it also marked a huge transformation in our culture: the dawn of the era of affordable home computing. We can only wonder how he would explore and exploit the technologies that are so ubiquitous today.”

Amber Morgan adds, “One of our responsibilities is to preserve the museum’s collection. Up until now, we have only been able to address the computer disks themselves, and not the content held within them. This project has enabled us to safely extract the data, which can now be properly backed up, ensuring that the images will be preserved even if the original disks fail.”

The Warhol’s Director Eric Shiner said, “Warhol saw no limits to his art practice. These computer generated images underscore his spirit of experimentation and his willingness to embrace new media – qualities which, in many ways, defined his practice from the early 1960s onwards.”