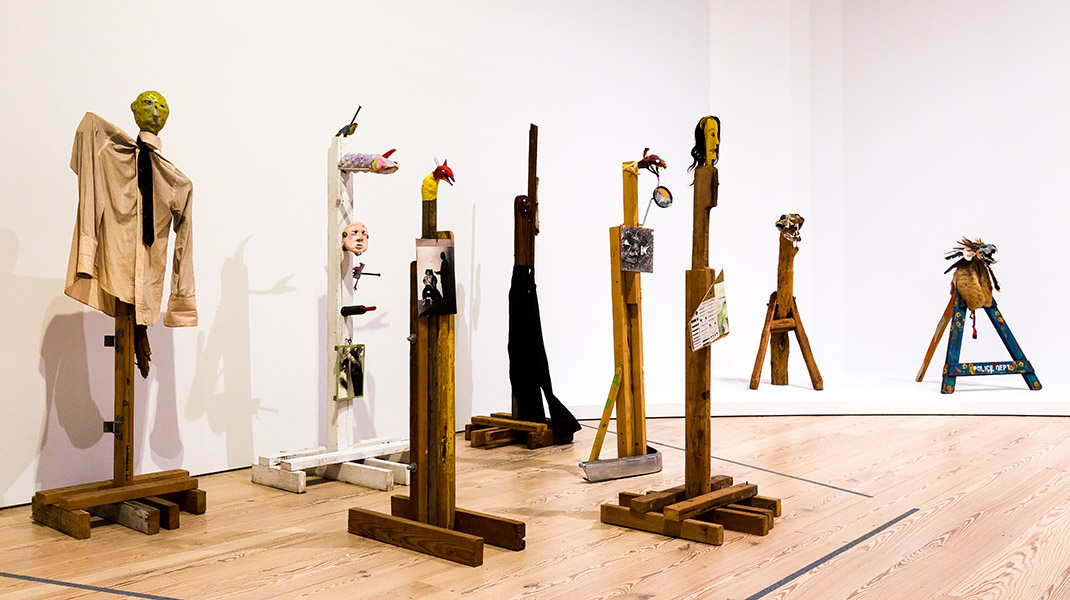 “One of the most inventive American artists working today, Jimmie Durham (b. 1940) has produced wryly political art over the last four decades. Using materials as varied as animal skulls, oil barrels, stone, and olive wood, he approaches his subjects with a potent blend of poetry and humor. Durham has lived outside the United States since the late 1980s and this is his first solo exhibition in this country in more than twenty years. Nonetheless, he has remained connected to important movements and practices in American art, notably sculptural assemblage, text and image appropriation, and performance art. With his singular and vital critique of Western systems of knowledge and power, Durham broadens our understanding of the history of American art and makes visible the ongoing repercussions of colonialism within the United States and globally.

Durham started making art in the mid-1960s, leaving the United States to enroll at the École des Beaux-Arts in Geneva, Switzerland, in 1969. There he worked primarily in performance and sculpture and became increasingly interested in the possibility of integrating art into public life. Focusing his attention on activism upon his return to the United States, Durham worked from 1974 to 1979 for the American Indian Movement (AIM), an advocacy group that addresses issues facing Native Americans. The influence of Durham’s activist work can be seen in his art in the years that followed, when he began to explore the ways in which Eurocentric biases have impacted representations of Indigenous peoples.

An active participant in New York’s vibrant downtown artist community in the 1980s, Durham left in 1987, moving first to Mexico and then to a number of different countries in Europe. He has engaged deeply with the culture and history of each of his adopted homes, drawing on the local language, materials, and architecture to reframe larger political, historical, and philosophical questions. Throughout his travels, he has declared wherever he happens to be—whether Mexico City or Brussels, Marseille or Rome, Naples or Berlin—the ‘center of the world’.” —  Introductory Wall Text

Jimmie Durham: At the Center of the World is organized by the Hammer Museum, Los Angeles, and curated by Anne Ellegood, senior curator, with MacKenzie Stevens, curatorial assistant. The Whitney’s presentation is curated by Elisabeth Sussman, Sondra Gilman Curator of Photography, and assistant curator Laura Phipps.