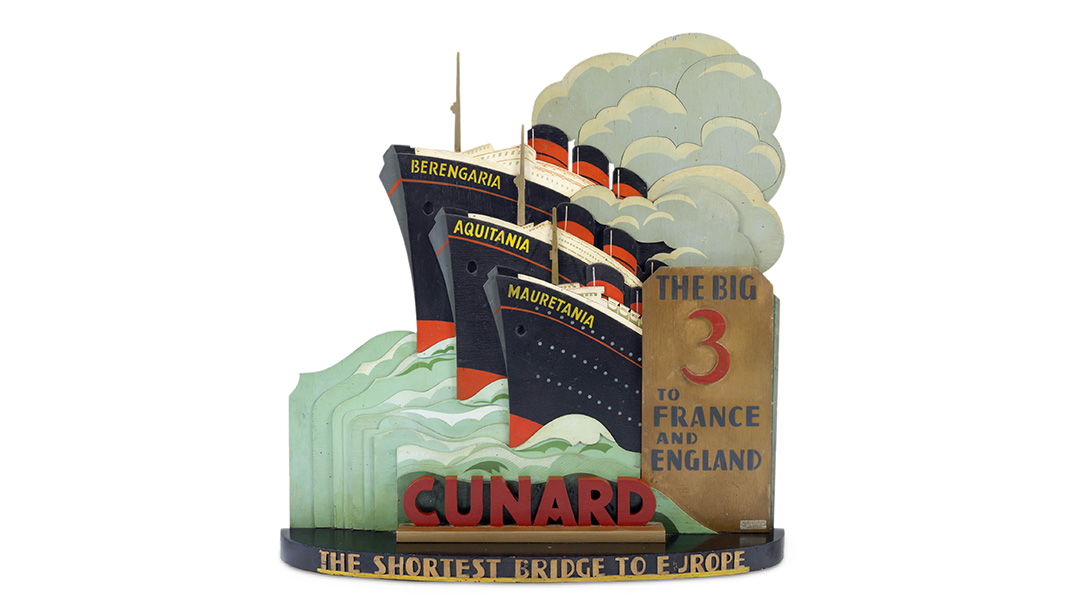 “The Peabody Essex Museum (PEM) presents Ocean Liners: Glamour, Speed and Style, the first exhibition to fully assess the design and cultural impact of the ocean liner. As showcases of opulence, technology and social sophistication, these floating cities captured the imagination of artists, engineers, and architects. This groundbreaking, international exhibition co-organized with the Victoria and Albert Museum, London (V&A), brings together nearly 200 works from the mid-19th century through the late-20th century, including paintings, sculpture, models, furniture, lighting, wall panels, textiles, fashion, photographs, posters and film to explore the distinct design, elegant engineering and cultural dynamics of an era when ocean liners ruled the sea and the popular imagination.

The rich collections and curatorial perspectives of PEM and the V&A dovetail harmoniously for this exhibition. Founded in 1799 by sea captains and merchant traders, PEM has been actively collecting art and design related to ocean liners since at least 1870, building holdings of paintings, prints, posters and models that today number in the thousands. The V&A, one of the world’s leading institutions of art and design, began collecting ship models and technology patents to improve Britain’s commercial and manufacturing advantage in the 19th century, when it was known as the South Kensington Museum. In the 20th century, the V&A acquired ocean liner posters and ephemera, ceramics, textiles, metalwork and furniture, all with the aim of representing good design.” — PEM

“The great age of ocean travel has long since passed, but ocean liners remain one of the most powerful and admired symbols of 20th century modernity,” said Dan Finamore, PEM’s Russell W. Knight Curator of Maritime Art and History. “No form of transport was as romantic, remarkable or contested as the ocean liner and their design became a matter of national prestige as well as a microcosm of global dynamics and competition.”

Ocean Liners: Glamour, Speed and Style is co-organized by the Peabody Essex Museum, Salem, Massachusetts and the Victoria and Albert Museum, London.