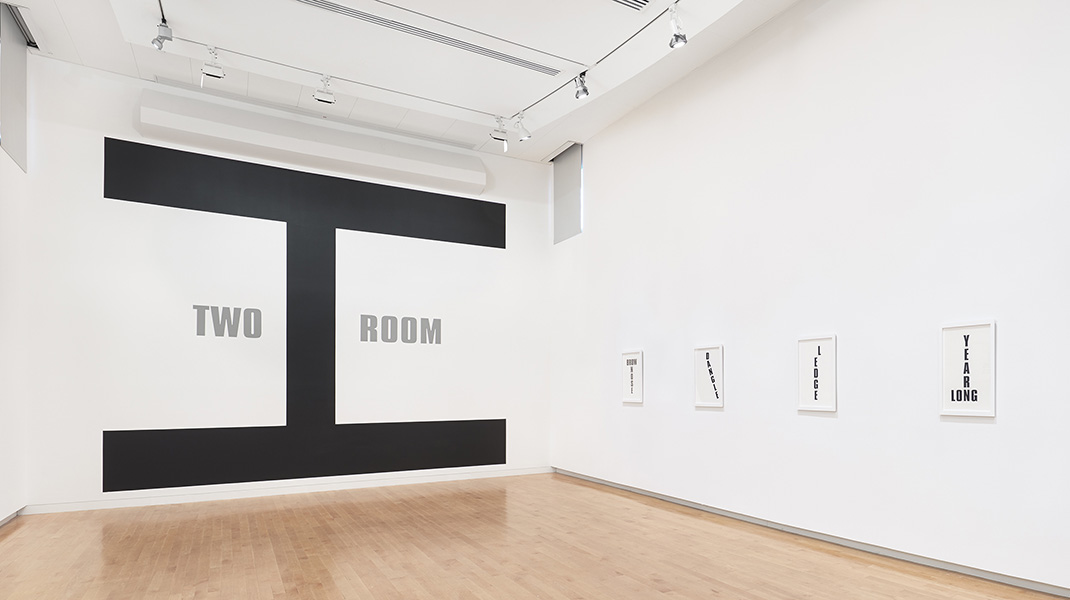 “It is often assumed that letterforms and printed words are neutral, graphic symbols that are merely vehicles for meaning. Like the relationship between fish and the ocean, we are generally oblivious to any content that might be present in the alphabet, skimming over words and sentences without giving a second thought to the meaning that perhaps lurks within. For artist Kay Rosen, this invisibility of content in letterforms and texts is the primary subject matter of a career that has now spanned four decades. Rosen’s interest in text is predicated upon her early study of linguistics and its focus on the analysis of the structure of language; but it is the visual nature of written language—a blind spot in traditional linguistics—that captivated her attention and paved the way for her practice as an artist. H Is for House, the title of both the exhibition and a large, two-part wall painting, points to Rosen’s chosen raw material, the alphabet, and the architectural nature of the works included.

All of the works on paper in the exhibition are of a vertical format and are rendered in black and white, which is unusual for the artist. Rosen’s horizontal, colored works are more like paintings and often relate to signage (the artist has frequently made billboards), but these works do not read as paintings or signs, but as physical constructions: letters and words used as building blocks, stacked and aligned, with both form and content frequently relating to gravity. However, the vertical compositions have another, deeper, level of content; two-dimensional works with a vertical format are traditionally referred to as portrait, as they relate to the figure, and Rosen’s vertical works exhibit strong figurative connotations that reveal her surprising interest in dance. Parallels can be found between Rosen’s work and the vernacular, repetitive structure in the work of post-modern dancers such as Trisha Brown and Lucinda Childs, both of whom are cited by the artist as influences. Rather than resorting to extreme artifice, Rosen, in her own words, creates ‘works that are practically self-made since they are created out of their own body parts, with only a little push from me.’

Rosen’s work is set apart from other text-based art by a concern with seeing words as well as reading them. Humor—of a sort—has also played an ongoing role in her work through the literary technique of word play, although not so much through invention as by simply revealing what is hidden in plain sight. Rosen’s humor grows out of the not-so-obvious truths that are found embedded inside words.” —  Introductory Wall Text by Richard Klein, exhibitions director