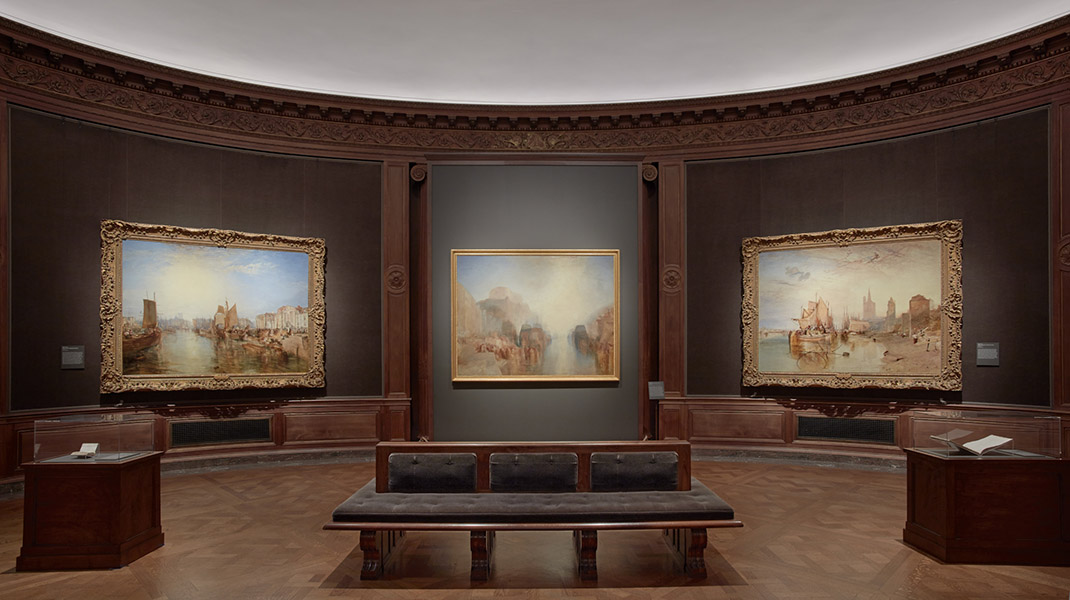 “Exploring a turning point in the career of Britain’s greatest land and seascape painter of the nineteenth century, a major exhibition at The Frick Collection will illuminate Joseph Mallord William Turner’s (1775–1851) distinctly modern approach to the theme of the port. Turner’s Modern and Ancient Ports: Passages Through Time centers around the Frick’s grand-scale Harbor of Dieppe and Cologne, both painted by the artist in the mid-1820s, and unites them for the first time publicly with a closely related yet unfinished work from Tate, London, that depicts the harbor of Brest, in Brittany. This trio of port scenes is accompanied by more than thirty of Turner’s oil paintings, watercolors, sketchbooks, and prints, among them other contemporary views of France, Germany, and England, as well as imagined scenes set in ancient Carthage and Rome. A longstanding subject in art, the port is a space of arrival and departure that links the city interior and the open water beyond, evoking a sense of journey and the passage of time. Whether portraying the ancient world or encapsulating contemporary life in a specific region, Turner returned to this time-honored theme to explore the relationship of past and present and, conscious of his own place in history, showcase his artistic innovations, chief among them his dazzling treatment of light and color.” — The Frick Collection

Comments Susan Galassi, “As with so many of our exhibitions, this show is built around major works in our collection and provides the occasion to bring fresh perspectives through new scholarship and engaging programming. The Frick’s harbors of Dieppe and Cologne, purchased more than a hundred years ago by Henry Clay Frick, are restricted from travel and have not been exhibited elsewhere for the past century. We are thrilled to provide our audiences with insight into Turner’s masterful technique and process by reuniting the Frick’s ports, which themselves have never before been the focus of an exhibition, with a third harbor scene from the Tate on a similar scale, along with other port scenes—both imagined and set in the present—in oil and watercolor that reveal how the artist developed this subject over time.”