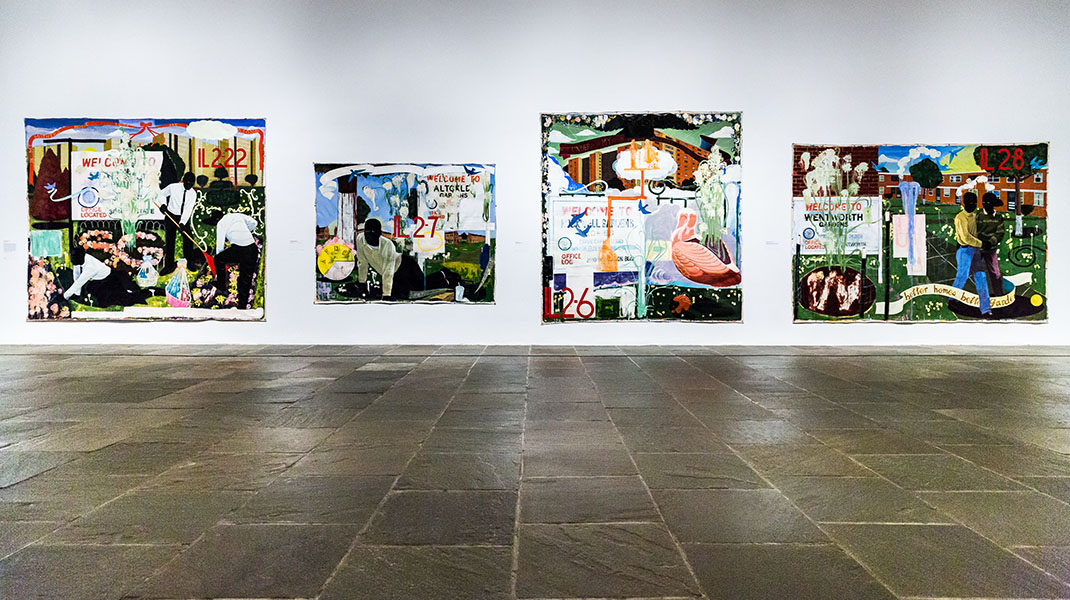 “This exhibition, the largest to date for Kerry James Marshall (born 1955), spans the artist’s remarkable thirty-five-year career. Born in Birmingham before the Civil Rights Act and having witnessed the Watts rebellion in Los Angeles in 1965, Marshall has long chronicled the African American experience. His large narrative paintings feature only black figures— defiant and celebratory assertions of blackness in a medium in which African Americans have often been invisible—and his exploration of art history stretches from the Renaissance to twentieth-century abstraction and beyond. Marshall reworks the canon through its most archetypal modes: the historical tableau, landscape and genre painting, and portraiture. His practice also touches on vernacular forms, such as murals and comic books, in order to correct, in his words, the “vacuum in the image bank.” The result is a visually stunning body of work, both intimate and monumental.

The exhibition begins on this floor with two large, layered compositions from 1993, pivotal in Marshall’s career. It continues to the right with collages and works on paper from the artist’s early practice in Los Angeles. These are followed by paintings from the late 1980s and early 1990s made in Chicago, where Marshall lives and works and developed a signature practice of painting in acrylic on the collaged surfaces of large unstretched canvases. These pictures playfully borrow from and critically revise the Old Masters while addressing themes of romance and history and ideals of beauty.” — Introductory Wall Text

School of Beauty, School of Culture, 2012