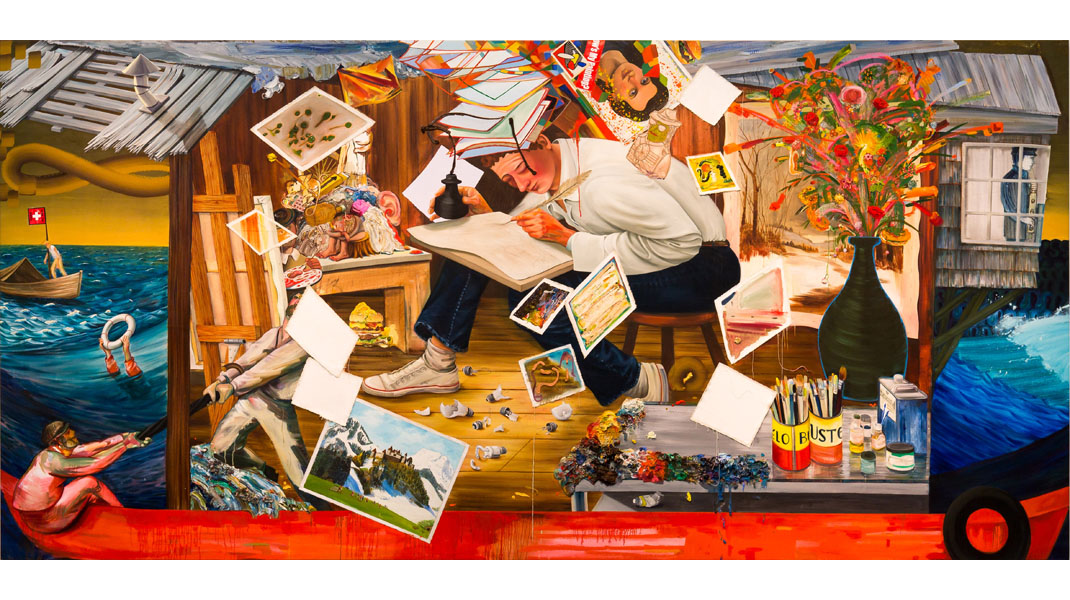 The first solo museum presentation in the United States of the work of Cally Spooner (b. 1983, Ascot, UK). The artist has produced a new site-specific installation for the New Museum’s Lobby Gallery. “On False Tears and Outsourcing” comprises a series of architectural additions to the gallery space and the presence of a group of dancers who respond to conflicting choreographic instructions: to stay intimately bound together while remaining fiercely separate. Choreography devised with and performed by Holly Curran, Maja Ho, Emily McDaniel, Ashton Muniz, José Rivera, Maggie Segale, and Jennifer Tchiakpe.

The first New York museum exhibition of work by London-based artist Goshka Macuga (b. 1967 Warsaw, Poland). Macuga’s practice typically applies in-depth historical and archival research to an interest in the evolving relationships among artists, institutions, politics, and communities. Her works investigate how art can be used to voice current concerns, rouse public debate, and inspire social change. Within her images and installations, she unearths associations between different actors (people, objects, and sites) that, in many cases, problematize the ways in which different organizations engage their publics and are shaped by socioeconomic and cultural developments in society. Throughout her career, Macuga’s work has embraced diverse mediums including sculpture, installation, architecture, and design.

“Nicole Eisenman: Al-ugh-ories” marks the first New York museum survey exhibition of Nicole Eisenman’s work and provides an in-depth look at the symbolic nature of the artist’s most striking depictions of individuals and groups—from intimate portraits to more complex narrative scenes. One of the most important painters of her generation, Eisenman (b. 1965, Verdun, France) has developed a distinct figurative language that combines the imaginative with the lucid, the absurd with the banal, and the stereotypical with the countercultural and queer. “Nicole Eisenman: Al-ugh-ories” highlights how allegory permeates Eisenman’s oeuvre and how she fluidly ties the fictional to the autobiographical and the past to the present.

The first New York museum exhibition of the work of New York–based artist Andra Ursuţa (b. 1979, Romania). Ursuţa’s sculptures and installations thrive on paradox and engage a visual language that weaves an art historical homage with a homespun, anarchic sensibility. From early in her career, Ursuţa has used a fatalistic dark humor to expose power dynamics, to probe the vulnerability of the human body, and to examine modes of desire. The Romanian-born artist immigrated to the United States in the late 1990s, but many of the narrative facets of her upbringing—from occult folk traditions to blundering nationalist propaganda—resonate throughout her work.

The first New York museum solo exhibition of Puerto Rican artist Beatriz Santiago Muñoz (b. 1972, San Juan, Puerto Rico). In her recent film and video work, Santiago Muñoz has documented the lives of individuals—political dissidents, teachers, and farmers—who are deeply invested in political transformation. The subjects of her films and videos reveal their close physical connections to their environments, sites marked by legacies of colonial trade and military occupation in the artist’s homeland of Puerto Rico, by recounting stories and engaging natural materials as well as inherited or handmade objects.