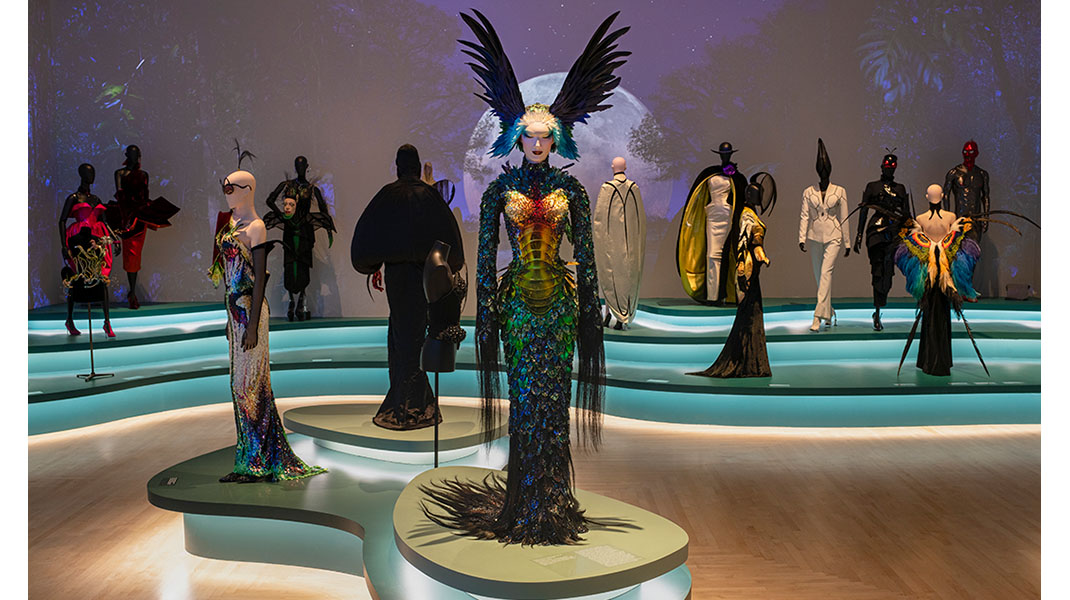 “From haute couture designs to stage costumes, photographs, films, and unpublished archives, Thierry Mugler: Couturissime is the first retrospective to explore the fascinating, edgy universe of French designer and creator of iconic perfumes Thierry Mugler. Organized by the Montreal Museum of Fine Arts, Thierry Mugler: Couturissime has been adapted for the Brooklyn Museum by Thierry-Maxime Loriot, curator of the exhibition, and Matthew Yokobosky, Senior Curator of Fashion and Material Culture, Brooklyn Museum. Showcasing over 100 outfits, most on view for the first time, the exhibition also includes accessories, videos, photographs, sketches, and a special gallery dedicated to fragrances. Already seen by more than one million visitors in Canada, Germany, the Netherlands, and France since its launch in 2019, the exhibition concludes its tour in Brooklyn.” — Brooklyn Museum

“The constant innovations, inventions, and avant-garde architectural silhouettes in the work of Mugler have marked an era,” says Thierry-Maxime Loriot, curator of the exhibition. “His singular style found a place in the history of fashion that still has a powerful influence on today’s generation of couturiers, not only because of its designs, but also because of the strong message of inclusivity, diversity, and empowerment in his body of work. To present the exhibition I created with him, in the city he lived in and loved so much, is the most beautiful tribute to celebrate the man and the artist’s legacy.”