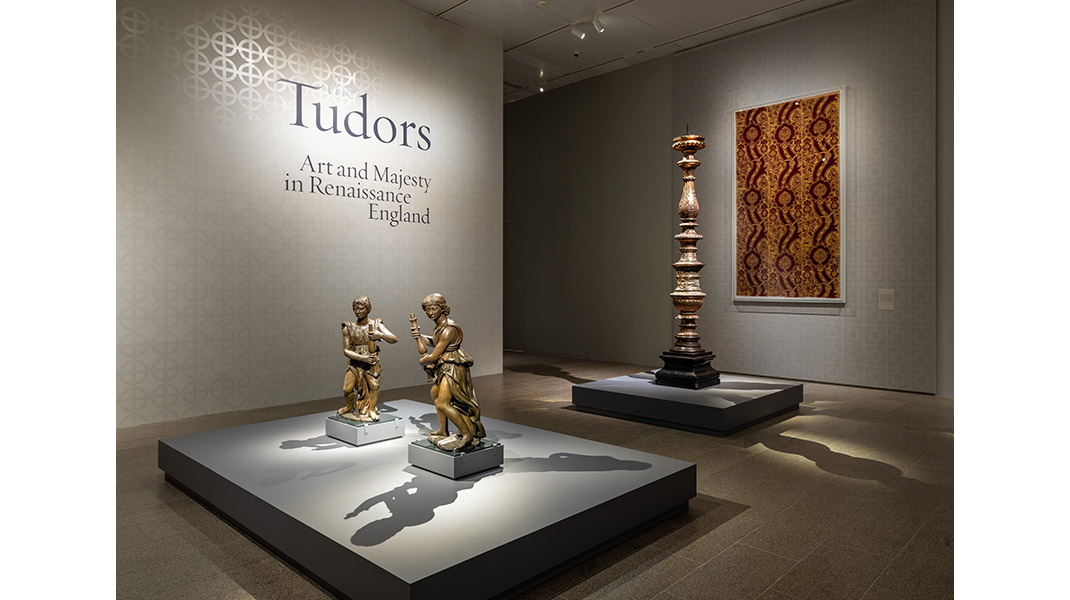 “From King Henry VII’s seizure of the throne in 1485 to the death of his granddaughter Queen Elizabeth I in 1603, England’s Tudor monarchs used art to legitimize and glorify their tumultuous reigns. The Tudors: Art and Majesty in Renaissance England traces the transformation of the arts under their rule through more than 100 objects—including iconic portraits, spectacular tapestries, manuscripts, sculpture, and armor—from both the Museum collection and international lenders.

England under the volatile Tudor dynasty was a thriving home for the arts. An international community of artists and merchants, many of them religious refugees from across Europe, navigated the high-stakes demands of royal patrons against the backdrop of shifting political relationships with mainland Europe. The Tudor courts were truly cosmopolitan, boasting the work of Florentine sculptors, German painters, Flemish weavers, and Europe’s best armorers, goldsmiths, and printers, while also contributing to the emergence of a distinctly English style. This exhibition features works of art made under the patronage of all five Tudor monarchs: Henry VII (reigned 1485–1509), Henry VIII (1509–47), Edward VI (1547–53), Mary I (1553–58), and Elizabeth I (1558–1603). It is organized thematically in five sections within an overall exhibition design that evokes the long galleries and intimate alcoves that defined Tudor palace architecture.” — The Met

Installation views of The Tudors: Art and Majesty in Renaissance England, on view October 10, 2022–January 8, 2023 at The Metropolitan Museum of Art. Photos by Anna-Marie Kellen, courtesy of The Met.

“This magnificent exhibition brings the stunning majesty and compelling drama of the Tudor dynasty to life,” said Max Hollein, Marina Kellen French Director of The Met. “By examining the wider political and societal context in which these sumptuous goods and extraordinary portraits were made, we can appreciate both their exquisite beauty as works of art and the complex and often turbulent stories they tell.”

The Tudors: Art and Majesty in Renaissance England is curated by Elizabeth Cleland, Curator in the Department of European Sculpture and Decorative Arts, and Adam Eaker, Associate Curator in the Department of European Paintings. Additional support was provided by Sarah Bochicchio, former Curatorial Research Assistant at The Met. The exhibition design is by Senior Exhibition Designer Fabiana Weinberg.

The exhibition is organized by The Metropolitan Museum of Art and The Cleveland Museum of Art, in collaboration with the Fine Arts Museums of San Francisco.