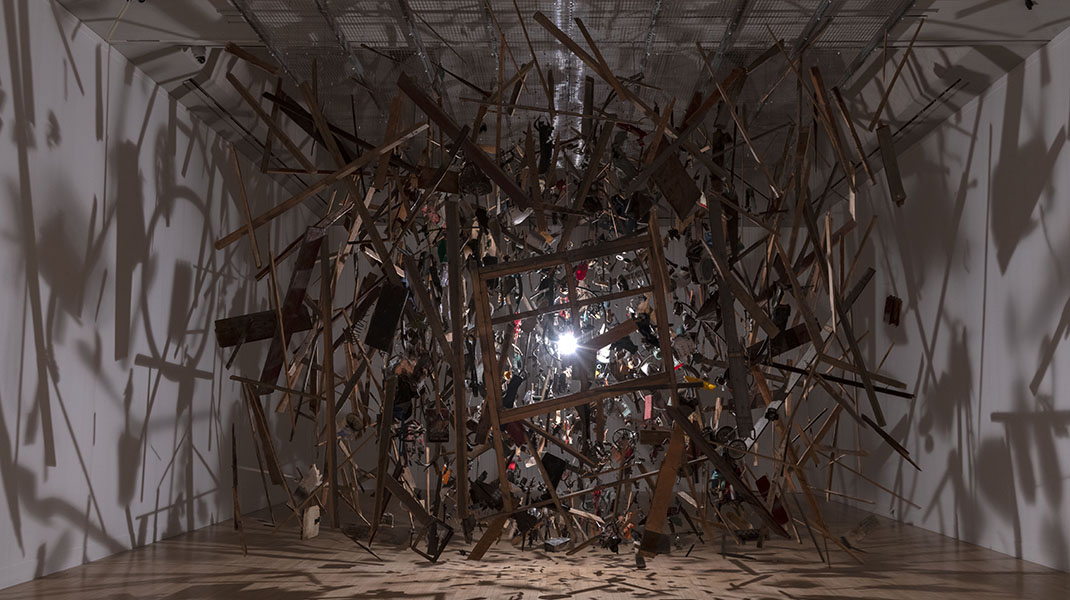 “Tate Britain presents the first major survey of Cornelia Parker’s works held in London. One of Britain’s leading contemporary artists, Parker is responsible for some of the most unique and unforgettable artworks of the past thirty years. Driven by curiosity, Parker transforms seemingly everyday objects into extraordinary works of art. Through visual allusions and metaphors, Parker’s works explore contemporary issues such as violence, human rights and environmental disaster. The exhibition brings together over 90 artworks spanning immersive installations, sculptures, film, photography and drawing, to celebrate the breadth of Parker’s highly experimental and wide-ranging practice to date.

Cornelia Parker first came to prominence in the late 1980s creating large-scale suspended installations and sculptures which have captivated audiences around the world ever since. This exhibition includes several of her best-known early works including Thirty Pieces of Silver 1988-89, an installation of flattened silver objects including teapots, candle sticks and dinnerware collected from charity shops and car boot sales; and Cold Dark Matter: An Exploded View 1991, a garden shed frozen at the moment of explosion, its fragments surrounding a single lightbulb. Examples of Parker’s more recent room-sized works are included, such as War Room 2015, created from the reams of perforated red paper negatives left over from the production of British Legion remembrance poppies, and Magna Carta (An Embroidery) 2015, a thirteen-metre long collectively hand-sewn embroidery of a Wikipedia page, which involved over 200 volunteers including public figures, human rights lawyers, politicians and prisoners.” — Tate Britain