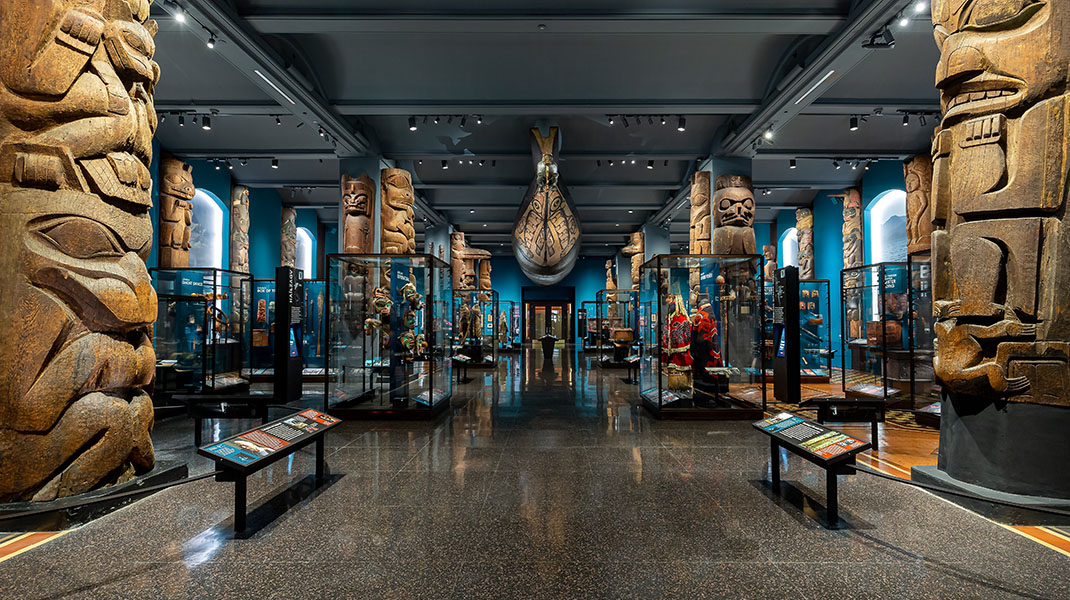 “The iconic Northwest Coast Hall at the American Museum of Natural History returns to public view on May 13 with new exhibits developed with Indigenous communities from the Pacific Northwest Coast. The Hall presents more than 1,000 cultural treasures that are installed throughout the gallery and in 50 display cases, many of which afford nearly 360-degree views of the treasures within.

Showcasing the creativity, scholarship, and history of the living cultures of the Pacific Northwest, the Northwest Coast Hall reopens in the Museum’s oldest gallery, which in 1899 became home to its first permanent exhibit dedicated to the interpretation of cultures. More than 120 years later, the Hall has been fully revitalized, with curation by Peter Whiteley, curator of North American Ethnology at the Museum, and Co-Curator Ḥaa’yuups, Nuu-chah-nulth scholar and cultural historian, working in collaboration with a group of Consulting Curators from the Coast Salish, Gitxsan, Haida, Haíłzaqv, Kwakwaka’wakw, Nuu-chah-nulth, Nuxalk, Tlingit, and Tsimshian communities.” — American Museum of Natural History

“It started with us listening. The strong voices of the Northwest Coast cultures are vibrantly amplified through the new installation of objects, presented in the round and with contextual relationships to one another,” said Kulapat Yantrasast, founder and creative director of WHY. “As an architect, the opportunity to really spend time absorbing and conversing with the multiple cultures represented in our project has greatly informed how we were able to bring out a fresh design, one that provides clarity and sense of place while respecting and responding to the deep context and diverse stories that the meaningful art objects present.”

Kulapat Yantrasast of WHY Architects developed the concept design for the revitalization of the Hall, working closely with the Museum’s award-winning Exhibition Department, led by Lauri Halderman, vice president for exhibition.