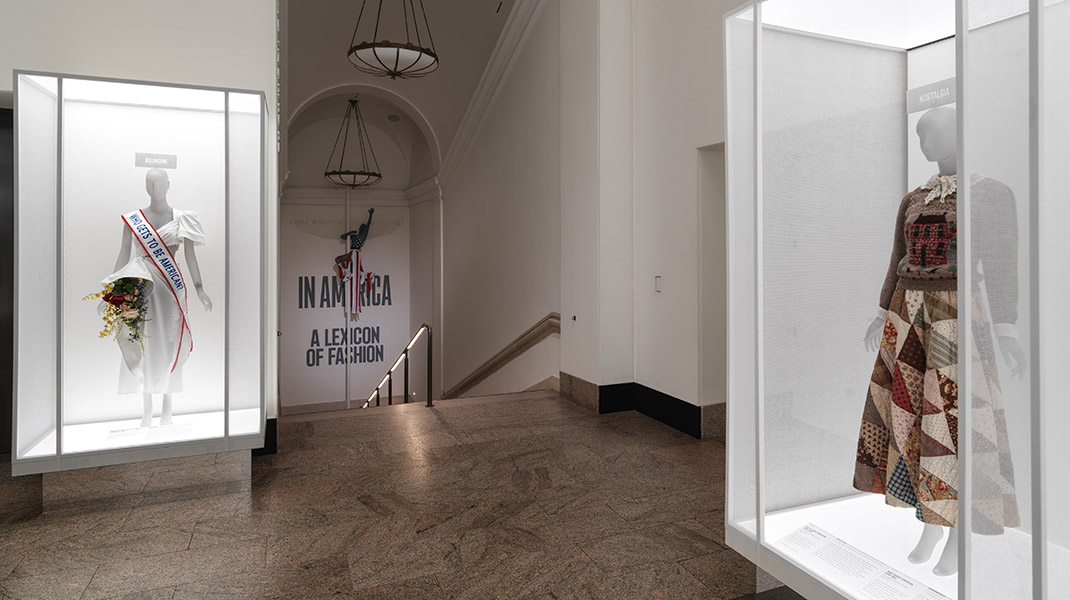 “The Costume Institute’s In America is a two-part exhibition on view September 18, 2021, through September 5, 2022. Part One, In America: A Lexicon of Fashion, in the Anna Wintour Costume Center, celebrates The Costume Institute’s 75th anniversary and establishes a modern vocabulary of fashion. Part Two, In America: An Anthology of Fashion—opening in the American Wing period rooms on May 5, 2022—will present sartorial narratives that relate to the complex and layered histories of those rooms. Parts One and Two will close on September 5, 2022.

Part One—In America: A Lexicon of Fashion: Smaller in scale than Part Two, this portion of the exhibition, in the galleries of The Costume Institute’s Anna Wintour Costume Center, uses the organizing principle of a patchwork quilt. A signature quilt from The Met’s American Wing collection, begun in 1856 by Adeline Harris Sears and made of small, diamond-shaped squares signed by some of the most famous Americans of the period—including eight Presidents—opens the show and serves as a metaphor for the United States and its unique cultural identities.” — The Met

“Fashion is both a harbinger of cultural shifts and a record of the forces, beliefs, and events that shape our lives,” said Max Hollein, the Marina Kellen French Director of The Met. “This two-part exhibition considers how fashion reflects evolving notions of identity in America and explores a multitude of perspectives through presentations that speak with powerful immediacy to some of the complexities of history. In looking at the past through this lens, we can consider the aesthetic and cultural impact of fashion on historical aspects of American life.”

Part One is organized by Andrew Bolton with Amanda Garfinkel, Assistant Curator, and The Costume Institute curatorial team. Part Two is organized by Bolton and Jessica Regan, Associate Curator of The Costume Institute, and Amelia Peck, the Marica F. Vilcek Curator of American Decorative Arts and Supervising Curator of the Ratti Textile Center, with the support of Sylvia Yount, the Lawrence A. Fleischman Curator in Charge of the American Wing.