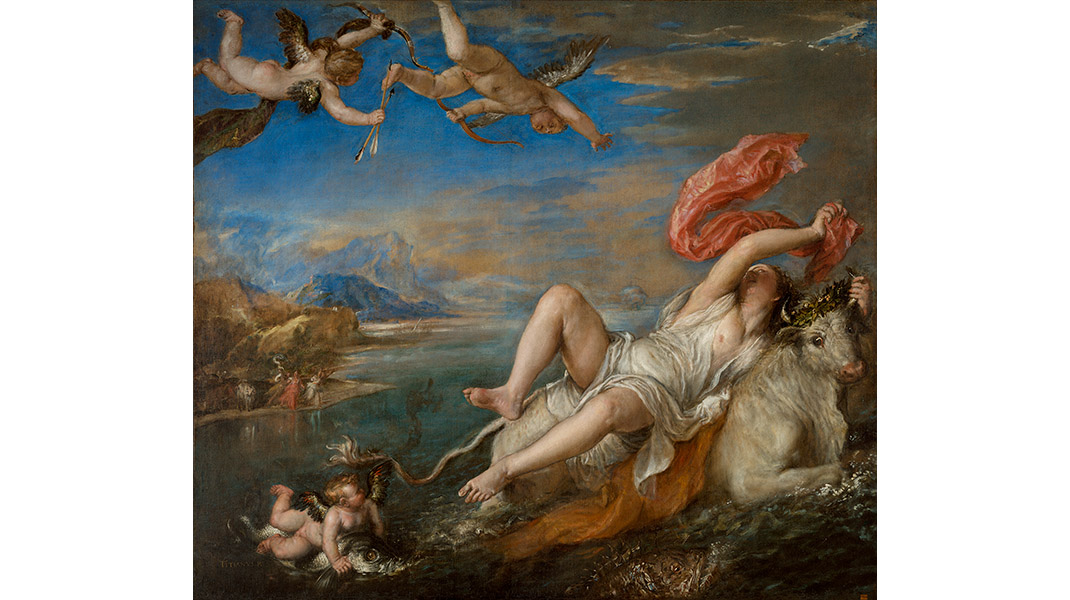 “For the first time in more than four centuries, the epic series of mythological paintings by Titian, one of the most celebrated artists of the Renaissance, is reunited in Titian: Women, Myth & Power. The exhibition—jointly organized by The National Gallery, London; National Galleries of Scotland, Edinburgh; Museo Nacional del Prado, Madrid; and the Isabella Stewart Gardner Museum (ISGM)—brings together the Gardner’s masterpiece, The Rape of Europa, with its companion paintings from Spain, England, and Scotland. Titian: Women, Myth & Power makes its final, and only US, stop at the ISGM.

In 1550, Prince Philip, the future king of Spain and world’s most powerful ruler, commissioned Titian (Italian, about 1488–1576), the most famous artist in Europe, to create a group of paintings. Inspired by the ancient Roman poet Ovid’s Metamorphoses, Titian produced six large-scale canvases depicting stories from classical mythology. Calling the pictures ‘poesie’ or ‘painted poems,’ Titian expertly captured moments of intense drama, exploring themes of power, desire, and even death. The paintings, considered Titian’s tour de force, are among the most original visual interpretations of these classical myths, touchstones in European art history, and some of the greatest Renaissance works ever made.” — Isabella Stewart Gardner

“We are honored to partner with The National Gallery (London), National Galleries of Scotland, and Museo Nacional del Prado on this historic reunion of Titian masterworks,” says Peggy Fogelman, the ISGM’s Norma Jean Calderwood Director. “One hundred twenty-five years ago, The Rape of Europa became the centerpiece of Isabella’s collection and strengthened her resolve to create a world-class museum. Isabella would be delighted to witness her masterpiece reunited at the Gardner Museum with its partners, as well as the conversation and creativity it still inspires today.”

“Titian’s Europa is widely regarded as the most important Renaissance painting in the United States, and we are thrilled to see it return home as part of this unprecedented exhibition,” says Nathaniel Silver, exhibition curator and William and Lia Poorvu Curator of the Collection at the Gardner.