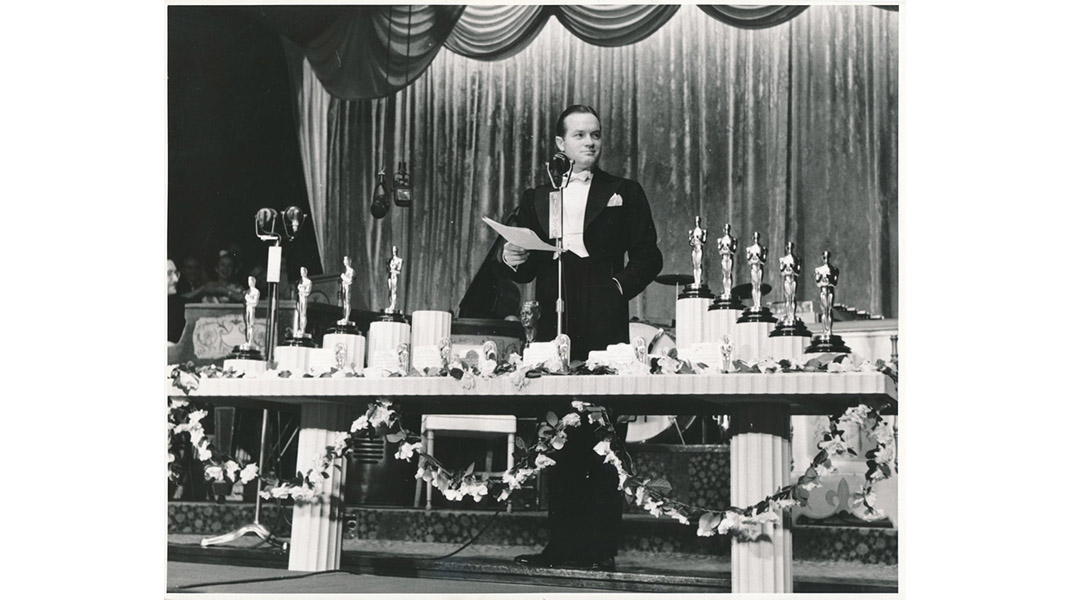 “The New-York Historical Society celebrates the golden age of comedy with So Ready for Laughter: Bob Hope and World War II. The special exhibition highlights the legendary performer and his unique role during World War II entertaining troops overseas. Coinciding with the 80th anniversary of the founding of the United Service Organizations (USO), the exhibition features artifacts, films, and rare photographs to illustrate how Hope helped lift spirits both abroad and on the home front with his USO and radio shows during a dark time in American history. A companion exhibition, The Gift of Laughter, delves into Hope’s varied career after World War II as a USO entertainer, television star, and Academy Award host demonstrating the many hats worn by comedians. His legacy will be brought to life with many items, including costumes from the Emmy Award-winning series The Marvelous Mrs. Maisel, as well as objects related to other comedians—real and imagined—influenced by Hope.” — New-York Historical Society

“Bob Hope achieved so much during his decades-long career, but his work entertaining and cheering up World War II-era troops holds a special place in American history,” said Dr. Louise Mirrer, president and CEO of the New-York Historical Society. “This captivating, nostalgic exhibition looks at how Hope’s legacy lives on nearly 80 years later, and we are proud to partner with The National WWII Museum and the Bob & Dolores Hope Foundation to bring this showcase to New York, the city that welcomed Hope when he first arrived in the U.S. and where his legendary career later flourished.”

“From the first time my father, Bob Hope, entertained the troops at California’s March Field in 1941, he knew he had discovered an audience of a lifetime,” said Linda Hope, chair and CEO of the Bob & Dolores Hope Foundation. “He truly appreciated the men and women who were sacrificing to defend America. It was his honor, along with the entertainers who accompanied him on those arduous and often dangerous trips, to connect with our fighting men and women on the front lines and bring them a touch of home, and let them laugh—even if only for a brief moment.  My father knew this was the ‘Greatest Generation’. In his memory, the Bob & Dolores Hope Foundation is thrilled to sponsor So Ready for Laughter, an exhibition which celebrates my Dad’s spirit and honors the courageous men and women who served our country during the perilous time of World War II.”

So Ready for Laughter: Bob Hope and World War II is organized by The National WWII Museum in New Orleans; curated by Kimberly Guise, assistant director for curatorial services. Cristian Petru Panaite, associate curator of exhibitions at New-York Historical, is coordinating curator of the New York presentation of So Ready for Laughter and curator of The Gift of Laughter.