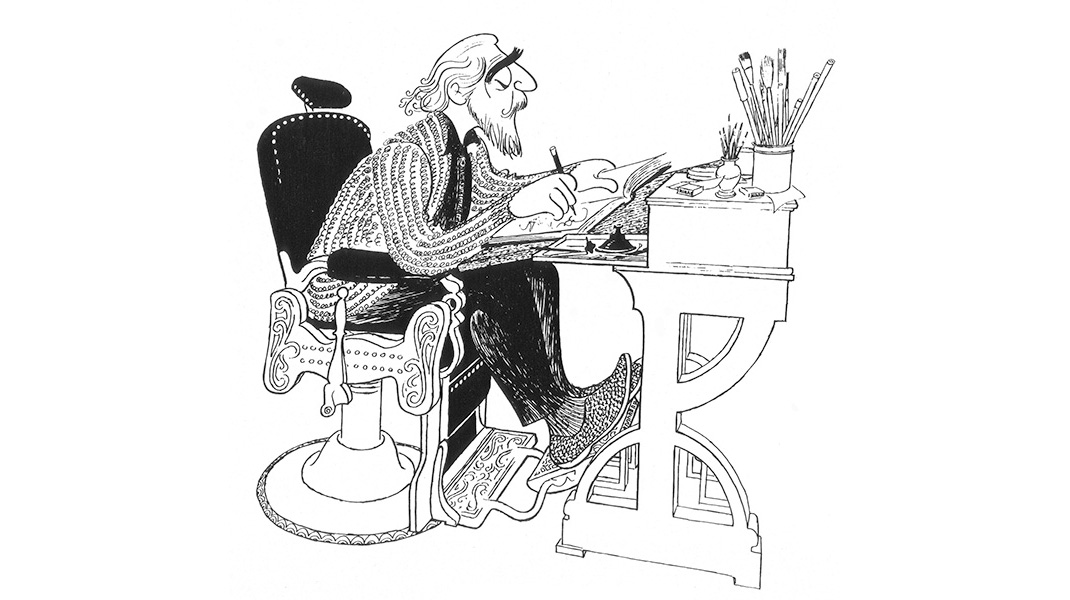 “The Al Hirschfeld Foundation is proud to announce the first in a series of online exhibitions exploring the work of one of the most iconic artists of the last century. On May 11, the Foundation will open a special exhibition for these times: ‘SOCIALLY DISTANT THEATER: The Solo Show as Seen by Hirschfeld’, a collection of 25 drawings, paintings, collages, and prints documenting a half century of one person shows. This special digital exhibit will be online for six weeks through June 20 at AlHirschfeldFoundation.org/exhibitions before a new exhibition is presented.

In addition to showing the artwork in detail as it has never been seen before, throughout the exhibition are links to videos of parts or the whole of some of these solo performances. You can see Henry Fonda as Clarence Darrow, Julie Harris as Emily Dickinson, or Robert Morse as Truman Capote. Or you can see Eric Bogosian, Whoopi Goldberg, and John Leguizamo channel a seemingly endless parade of characters from their solo shows. It turns out being alone has never been so interesting.” ― The Al Hirschfeld Foundation

Socially Distant Theater: The Solo Show As Seen By Hirschfeld

The first NINA: Are You With It, Rugged Path, and Girl From Nantucket, 1945

Patrick Stewart in A Christmas Carol, 1994

Self Portrait in Barber Chair, 1989

“In the world of the theater, the one-person show is perhaps the best situation and the worst,” writes David Leopold, Creative Director for the AHF in the introduction to the exhibition. “It is a supreme test of assurance and ability; of magnetism and charisma. But the format is also frightening; there’s no one to play against, to lean on, to share the criticism. For an actor, if there is no one else to take the blame, there is also no one to share the credit with as well. The applause at the end is for only one performer. In many ways these performers are all caricatures in the sense they have exaggerated elements of their subject to bring a whole life or simply a story to life. So in essence, Al Hirschfeld, the ultimate solo artist, is the ideal portraitist for this unique form of theater.”