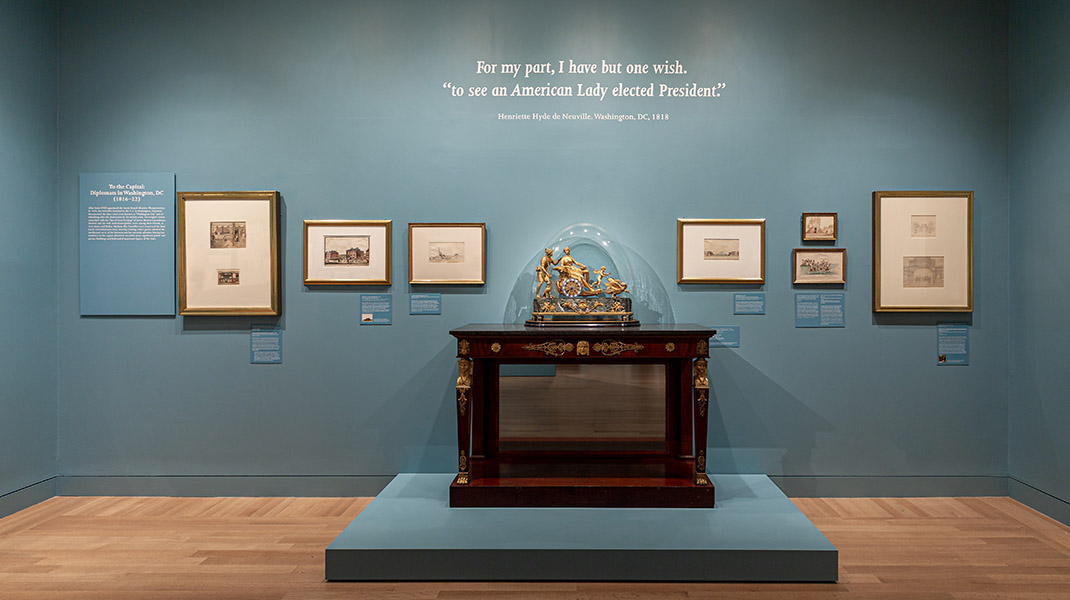 “The New-York Historical Society introduces visitors to a little-known artist whose work documented the people and scenes of early America. Artist in Exile: The Visual Diary of Baroness Hyde de Neuville, on view in the Joyce B. Cowin Women’s History Gallery of the Center for Women’s History, presents 114 watercolors and drawings by Anne Marguérite Joséphine Henriette Rouillé de Marigny,   Baroness Hyde de Neuville (1771–1849). Selftaught and ahead of her time, Neuville’s art celebrates the young country’s history, culture, and diverse population, ranging from Indigenous Americans to political leaders. Curated by Dr. Roberta J.M. Olson, curator of drawings at New-York Historical, this exhibition is the first serious exploration of Neuville’s life and art—showcasing many recently discovered works including rare depictions of European scenes and people at work, a lifelong sociological interest—and is accompanied by a scholarly catalogue.” — New-York Historical Society

“Baroness Hyde de Neuville’s status as a woman, an outsider, and a refugee shaped her view of America and Americans, making her a particularly keen and sympathetic observer of individuals from a range of socioeconomic and ethnic backgrounds,” said Dr. Louise Mirrer, president and CEO of the New-York Historical Society. “Neuville could never have envisioned that her visual diary—created as a personal record of her travels and observations of early America—would become an invaluable historical document of the early republic. Yet her drawings vividly evoke the national optimism and rapid expansion of the young United States and capture the diversity of its inhabitants.”