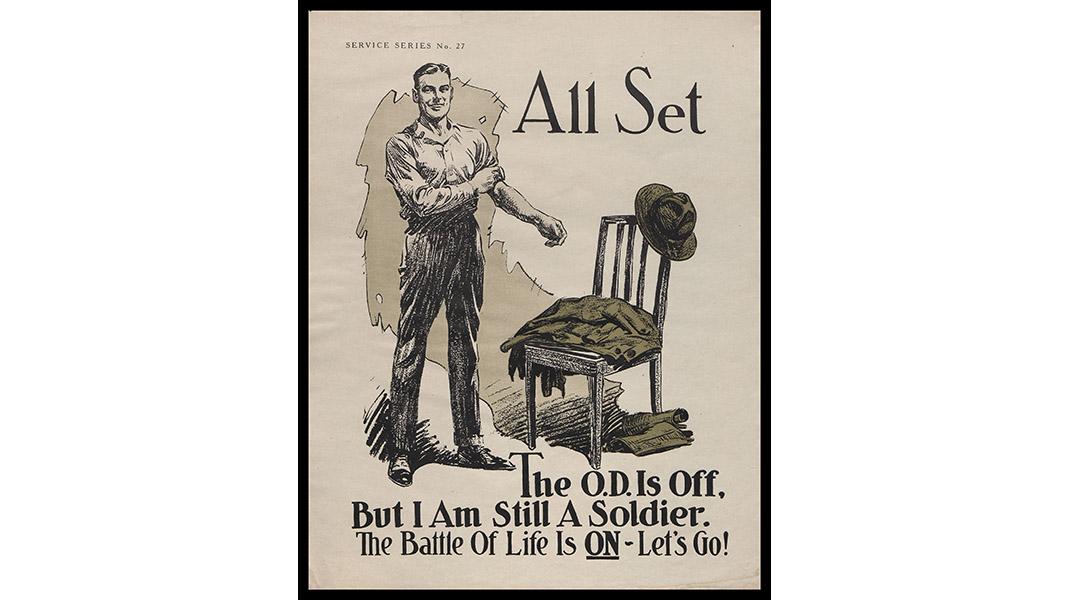 “From the earliest history of armed conflict soldiers have done their duty and returned to their homes and families. In the aftermath of World War I millions of servicemen and women came home from a war that was unprecedented in its impact on those who experienced it. For some who served, the war’s impact on their bodies and minds lasted a lifetime.

Beyond the dockside homecomings and the main street parades, what was the returning veteran’s experience in being a “civvie” again? Were they able to make this transition smoothly? Return to work or school and get on with their former life? Or, did they find it difficult and require help?

We’re Home—Now What? examines the challenging transition for service personnel from War-time duty to civilian life through archival materials.

The exhibition highlights a collection of posters commissioned by the U.S. Army, General Staff’s Morale Section. All but one poster were created by Gordon Grant, an Army captain and illustrator during World War I. These posters communicate messages about how an honorably discharged serviceman can make a positive impact on their community through appearance and conduct. The posters are essentially an instructional tool, conveying an image of a model former serviceman who uses the discipline, can-do attitude and leadership skills, developed while in the service.” — National WWI Museum and Memorial

Illustrations by U.S. Army captain Gordon Grant. These posters served as an instructional tool for soldiers returning to civilian life after World War I.

When You Go Home. Cover of an informational booklet given to soldiers returning from World War I service that addresses discharge, relationships and sexual health.

Where Do We Go From Here. Written by William Brown Meloney and distributed by War Camp Community Service, this booklet provided information related to the processes and procedures for soldiers discharged after World War I.