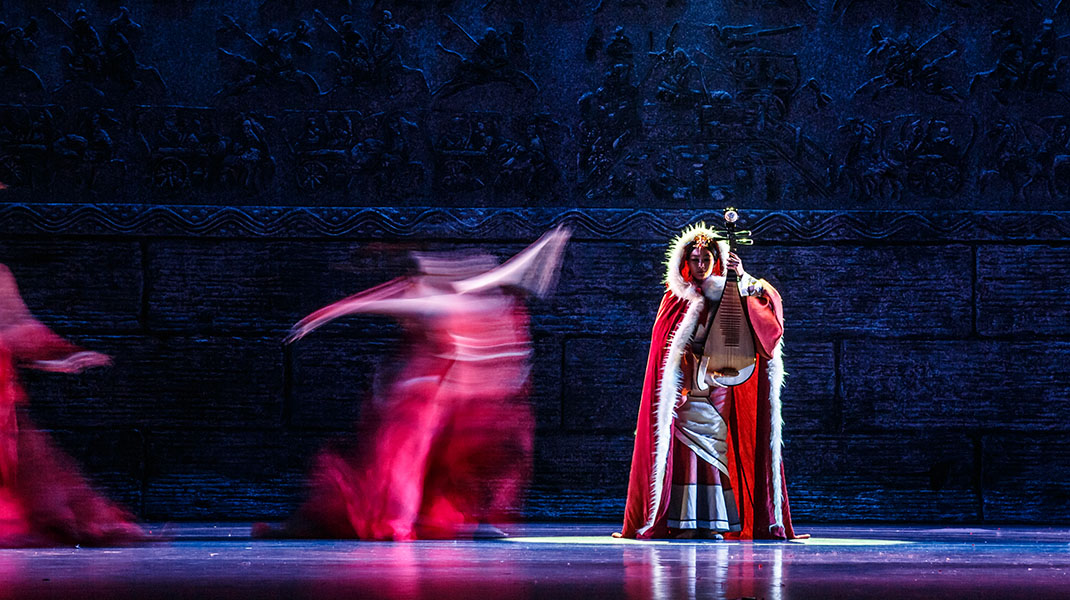 Princess Zhaojun is a new dance drama performed by the China National Opera & Dance Drama Theater with a cast that includes over 50 dancers. Direct from China with traditional Chinese music, opulent costumes, and expressive choreography, Princess Zhaojun brings to life the real story of one of China’s most important heroines, Wang Zhaojun, then an imperial concubine, who sacrifices her comfortable palace life to secure peace on the turbulent border of northern China.

Centuries ago, the Xiongnu, a minority ethnic group on China’s north, had constantly invaded the territory that today stands as China’s Inner Mongolia region, and threatened the northern border of Han Dynasty. During the period of Emperor Yuan (49BC-33BC), Huhanye Chanyu, monarch of the Xiongnu, expressed his wish to establish friendly relations with Han Dynasty. Emperor Yuan decided to make peace with Huhanye Chanyu through marrying off his daughter. His daughter, the princess, refused the arrangement, and Wang Zhaojun, bored with palace life, offered to go instead. To Wang’s surprise, she fell madly in love with Huhanye and did her best to serve as a good queen and build up friendly ties with the Han Dynasty. Today, the name of Zhaojun not only symbolizes physical beauty, but also a spirit of goodwill to bridge different cultures, even at the expense of one’s own interests.

Said Wang Xiuqin, General Manager of China Performing Arts Agency, CAEG, “Wang Zhaojun is an unsung heroine in the history of Chinese culture and selflessly offered herself in marriage to the monarch of Xiongnu to bring about peace. We hope that this dance drama, performed with imagination and elegance by the China National Opera & Dance Drama Theater, will excite the hearts and minds of audiences and bring the story of Wang to life.”

Princess Zhaojun is presented by China Arts and Entertainment Group Ltd. (CAEG) and performed by the China National Opera & Dance Drama Theater. The production is directed and choreographed by Ms. Kong Dexin, a 77th-generation direct descendant of Confucius, written by Yu Ping, and composed by Zhang Qu. Princess Zhaojun has scenic and lighting design by Ren Dongsheng, costume design by Yang Donglin, and style design by Sun Aina.