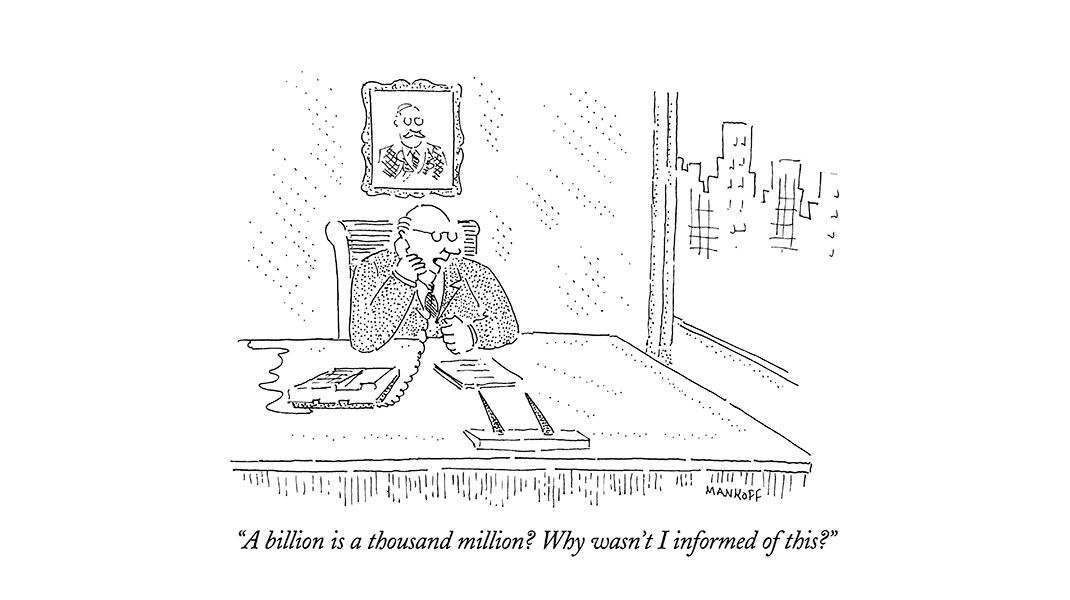 The first-ever math cartoon exhibition, What’s So Funny About Math? features 20 math-related cartoons by artists from across the country, including Roz Chast, Drew Dernavich, Dana Fradon, James Stevenson, Robert Leighton, Jack Ziegler, Bob Mankoff, Charlie Hankin, Sidney Harris, Nate Fakes, Dan Reynolds, Mike Seddon, Pat Byrnes, Mark Heath, and Nick Kim. The exhibit  includes commentary by notable mathematicians and a caption contest in which visitors to the exhibition will have the opportunity to create their own caption for one of the cartoons on display.

“Math doesn’t always strike people as a funny subject, which is why we are thrilled to partner with Bob Mankoff — one of the country’s preeminent cartoonists — to launch the first-ever exhibition featuring math-related cartoons,” explained Cindy Lawrence, Executive Director of MoMath. “‘We are very excited to share math, laughter, and new perspectives with the MoMath community.”

“We welcome the opportunity to team up with MoMath to help shed light on a lesser-known side of mathematics–the lighter side,” said Bob Mankoff, Founder of CartoonCollections.com. “Contrary to your beliefs as a child, math can be funny with the right perspective. There’s nothing better than the perfect cartoon to succinctly amplify a message and challenge assumptions, axioms, and even quadratic equations.”