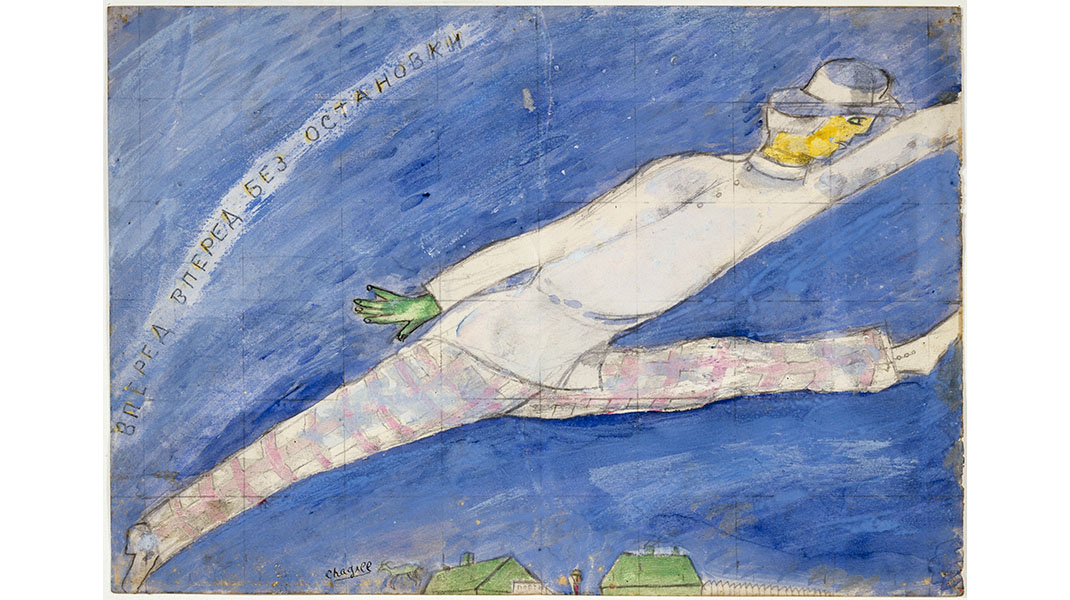 “I found myself in Vitebsk when the great celebrations of the October Revolution were over, but the city was still resplendent with Malevich’s designs—circles, squares, dots, and lines of different colors—and with Chagall’s flying people. I had the impression of being in an enchanted city, but in those days everything was wonderful, and everything was possible, and at that moment the people of Vitebsk had become Suprematists.” — Sofia Dymshits-Tolstaia, 1921

“This is the first major exhibition to explore a little-known chapter in the history of the Russian avant-garde: Marc Chagall’s encounter with the leading figures of abstraction, El (Lazar) Lissitzky and Kazimir Malevich, at the time of the Russian Revolution. In 1917 Communist forces overthrew the autocratic Tzarist regime that had ruled Russia for more than four hundred years; a civil war followed, culminating in the establishment of the Soviet Union. This radical change in government kindled a passionate idealism among artists, who saw themselves as agents in the remaking of Russian society and culture.

The three major figures sought, each in his distinctive fashion, to develop a leftist art in tune with the new revolutionary emphasis on collectivism, education, and innovation. Chagall remained mostly faithful to a figurative and allegorical style, in contrast to Malevich, whose recent invention, Suprematism, offered a radical form of geometric abstraction. Lissitzky, a trained architect, applied the concepts of Suprematism to his innovative Prouns—geometric compositions that he called ‘a transfer station on the way from painting to architecture.’

In this period of intense artistic and political ferment, history was made through art. Visionary creativity was nurtured in a city far from the cultural centers of Moscow and Petrograd. The five years following the 1917 Revolution transformed Vitebsk into the laboratory of a new world.” — Introductory Wall Text

David Yakerson, Sketch for the Composition “Panel with the Figure of a Worker,” 1918, watercolor and ink on paper. Vitebsk Regional Museum of Local History. Photograph by Vorontsov

Kazimir Malevich, Suprematism of the Spirit, 1919, oil on panel. Stedelijk Museum Collection, Amsterdam, on loan from the Cultural Heritage Agency of the Netherlands and Stichting Khardzhiev

UNOVIS Creative Committee, September 1921 Standing in back, left to right: Ilya Chashnik, Lazar Khidekel, and Kazimir Malevich Seated at the table, left to right: Lev Yudin, Vera Ermolaeva, Nikolai Suetin with the UNOVIS emblem on his cuff, and Nina Kogan Seated on the floor, left to right: N. Efros and Mikhail Veksler At right: Efim Royak doubled over and Ivan Chervinka by the easel Photo courtesy Lazar Khidekel Family Archives and Art Collection