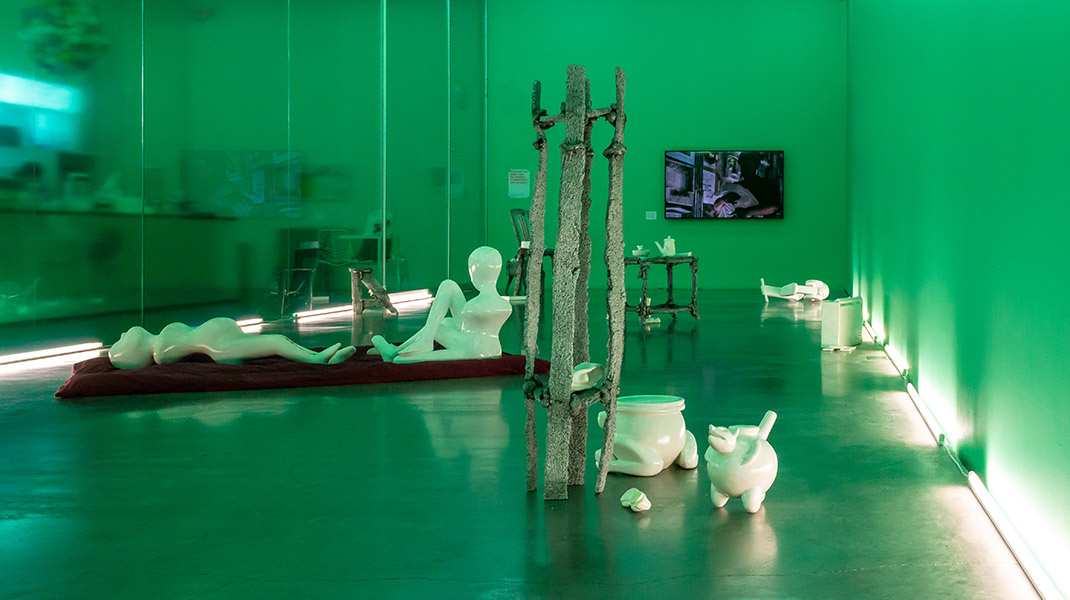 Ramírez-Figueroa’s installations engage fantasy and allegory, combining sculpture and experimental theater to transfigure everyday images and objects into symbolic tableaux. Though the artist’s works often exude a sense of whimsy and playfulness, they also allude to tragic and traumatic events that have shaped the social and political climate of present-day Guatemala.

“The House at Kawinal,” the artist’s first solo exhibition in the US, presents a recent performance for video, Life in His Mouth, Death Cradles Her Arm (2016), together with a new body of sculptures inspired in part by the artist’s research into the effects of the construction of the Chixoy Hydroelectric Dam in Guatemala in the early 1980s. To build the dam, the Guatemalan government forcibly displaced thousands of Achi Mayan people through brutal military-led massacres that wiped out villages throughout the Chixoy River Valley. The flooding caused by the dam also submerged the Late Mayan (1100–1524 AD) city of Kawinal, the ruins of which are now largely invisible and inaccessible. The figurative sculptures that compose Ramírez-Figueroa’s New Museum installation suggest a lost and fragmented domestic space and evoke this violent displacement and its lasting impact on families, indigenous heritage, and the natural landscape.” — Introductory Wall Text

The exhibition is curated by Natalie Bell, Associate Curator.