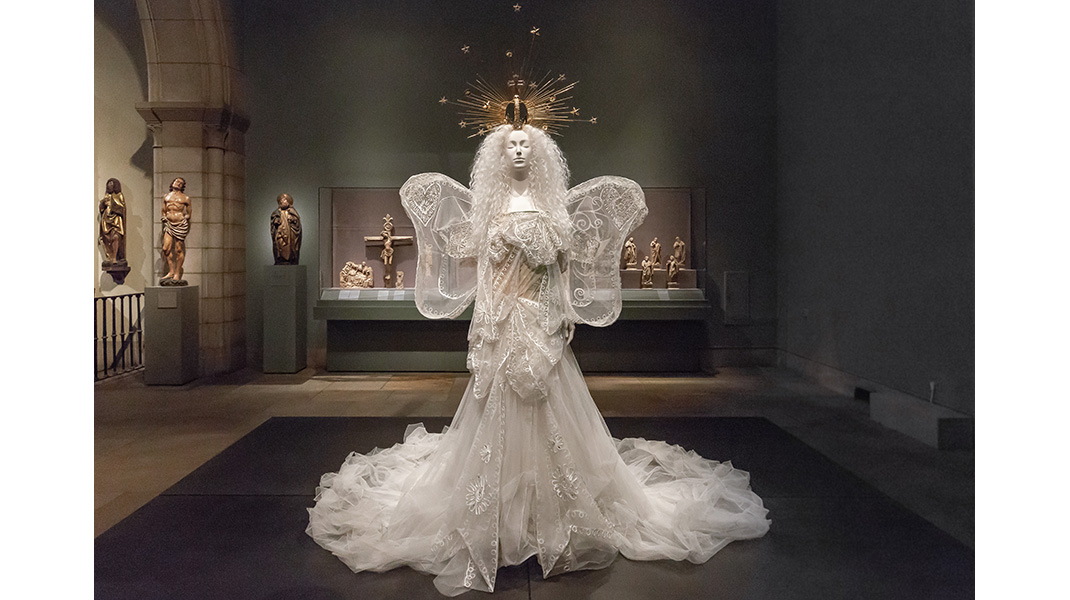 “’Heavenly Bodies’ features the work of designers who for the most part were raised in the Roman Catholic tradition. While their current relationships to Catholicism vary, most acknowledge its enduring influence on their imaginations. On the surface, this influence is expressed through explicit Catholic imagery and symbolism as well as references to specific garments worn by the clergy and religious orders. On a deeper level, it manifests as a reliance on storytelling, and specifically on metaphor—which the sociologist Andrew Greeley describes as the essential characteristic of a particular sensibility he defines as ‘the Catholic imagination.’

This exhibition explores how the Catholic imagination has shaped the creativity of designers and how it is conveyed through their narrative impulses. These impulses are reflected in the organization of the exhibition, which unfolds as a series of short stories told through conversations between religious artworks in The Met collection and fashions of the twentieth and twenty-first centuries. The Catholic imagination also operates on an experiential level, and, accordingly, the show’s configuration evokes the concept and practice of a pilgrimage.

The journey begins at The Met Fifth Avenue in the Byzantine and medieval art galleries and continues in the Anna Wintour Costume Center. It concludes at The Met Cloisters in northern Manhattan, where elements from French monasteries have been rebuilt as four cloisters. While the fashions might seem far removed from the sanctity of the Catholic Church, these contexts illuminate the myriad ways in which they embody the imaginative traditions of Catholicism. Taken together, the fashions and artworks in ‘Heavenly Bodies’ sing in unison with distinctly enchanted and enchanting voices.” — Introductory Wall Text