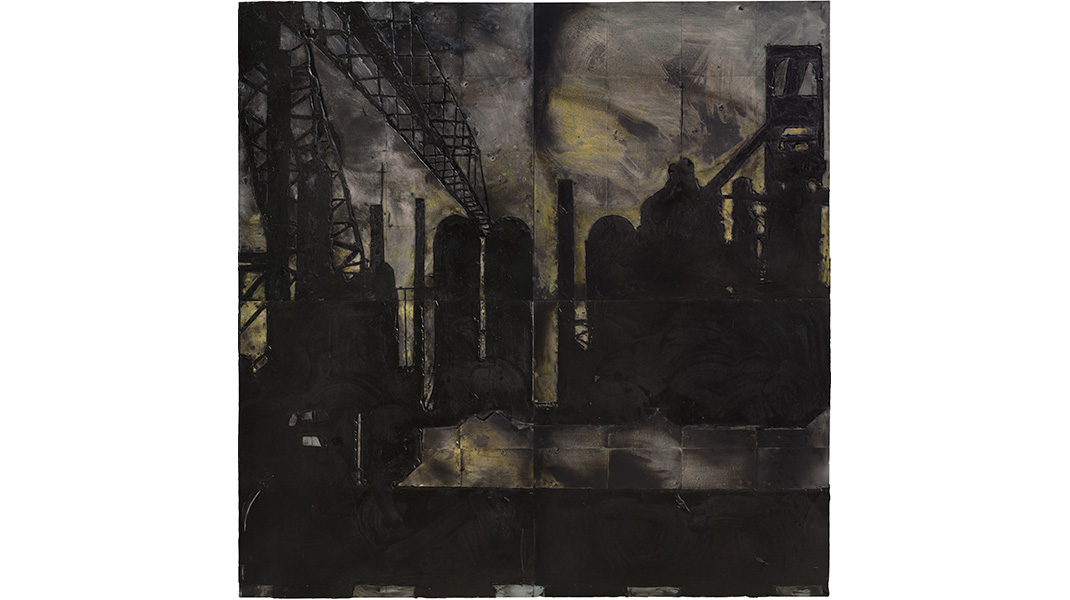 “Donald Sultan’s career as a painter, sculptor, and printmaker spans more than forty years. Born in 1951, Sultan rose to prominence in the 1980s, the same years he began his industrial landscape series The Disaster Paintings, on which he worked for nearly a decade. Illustrating an array of catastrophes, including forest fires, railway accidents, arsons, and industrial plants producing toxic plumes, the Disaster Paintings eternalize events that occur daily in contemporary life yet are quickly eclipsed when the next tragedy arises. Combining this subject matter with industrial materials such as tar and Masonite tiles, the works exemplify in both media and concept the vulnerability of the most progressive manufactured elements of modern culture.

In their large scale and impressive physicality, the Disaster Paintings echo the drama of their subjects. The series presents a merging of apparent opposites, bringing together the materials of minimalism with representational painting; stylistically combining figuration and abstraction; and making references to high and low culture, ranging from topical events drawn from newspaper imagery to nineteenth-century art-historical iconography.” — Introductory Wall Text

“The series speaks to the impermanence of all things. The largest cities, the biggest structures, the most powerful empires – everything dies. Man is inherently self-destructive, and whatever is built will eventually be destroyed…That’s what the works talk about: life and death.” — Donald Sultan

Donald Sultan, Dead Plant November 1 1988, 1988, latex and tar on canvas. Collection of the Modern Art Museum of Fort Worth, Museum purchase made possible by a grant from The Burnett Foundation. © Donald Sultan

“We always think our world is completely unassailable and will last forever. But then you see that’s not necessarily the case. So many great civilizations have disappeared. It’s usually hubris and human beings who bring about the downfall of their own structures.” — Donald Sultan