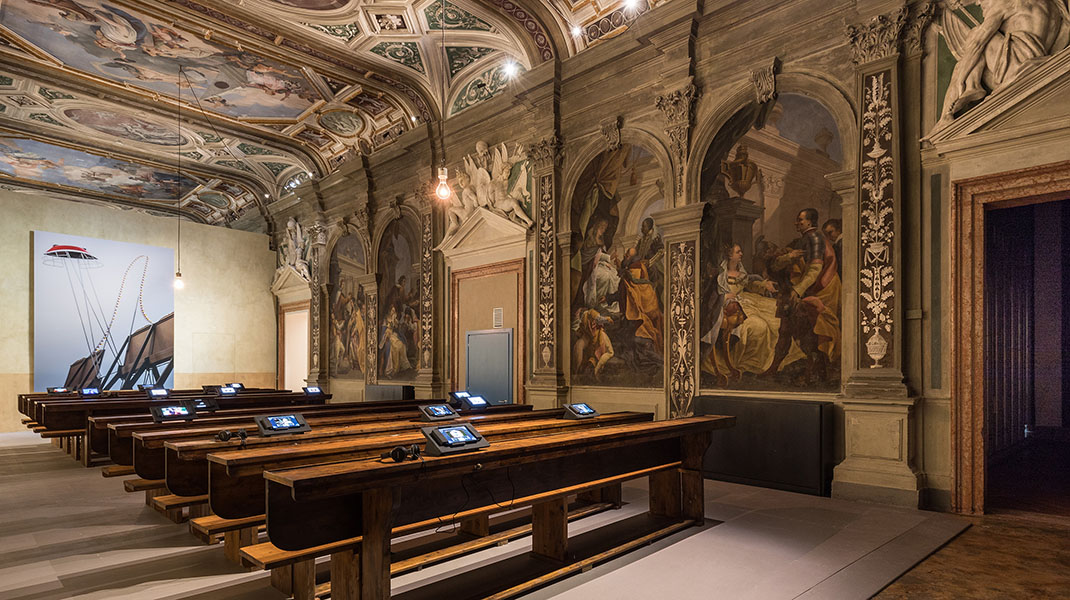 “The Boat is Leaking. The Captain Lied. — a project developed by Udo Kittelmann with Thomas Demand, Alexander Kluge and Anna Viebrock — fills the spaces of Ca’ Corner della Regina, Fondazione Prada’s venue in Venice, with artworks, movies and theater sceneries whose cross-pollination and mutual inspiration attest an innovative reflection on the meaning and ways of exhibition-making.

The project investigates how the intersection of those three languages makes it possible to tell a new story. To this end, visitors are offered a continuum of visual experiences rather than a collection of works on display. A constellation of references and quotations between paintings, photographs, moving images, objects, and architectural elements renews and extends to the point of overlapping each work’s subject, as well as the exhibition’s overall themes. Individual works, although recognizable and clearly traceable to previous exhibitions, screenings or performances, thus become part of a new narrative authored by the viewers themselves.

In The Boat is Leaking. The Captain Lied. everyone can build a different story, tracing their own path through the artists’ visual imagery: questioning the traditional divide between spectators and theatrical sceneries, the forms in which cinema can be exhibited, and the visual isolation in which artworks are usually displayed.

This project is also significant because of its specific way of proceeding: built through meetings and conversations, it finds its real expression both in the exhibition space and in the relation it establishes with its public. The encounter between Fondazione Prada and the project’s protagonists — in Munich, Milan, Sils Maria, Venice, and Berlin — have staked out a shared geography and a common feeling in which information, intuitions, conjectures, and hopes have been shared over several months, starting from the project itself but expanding to encompass its cultural, political and social contexts. The whole project’s experimental character thus attests the uncertainties of an age in which improvisation as a practice is increasingly necessary.” — Introduction by Miuccia Prada and Patrizio Bertelli