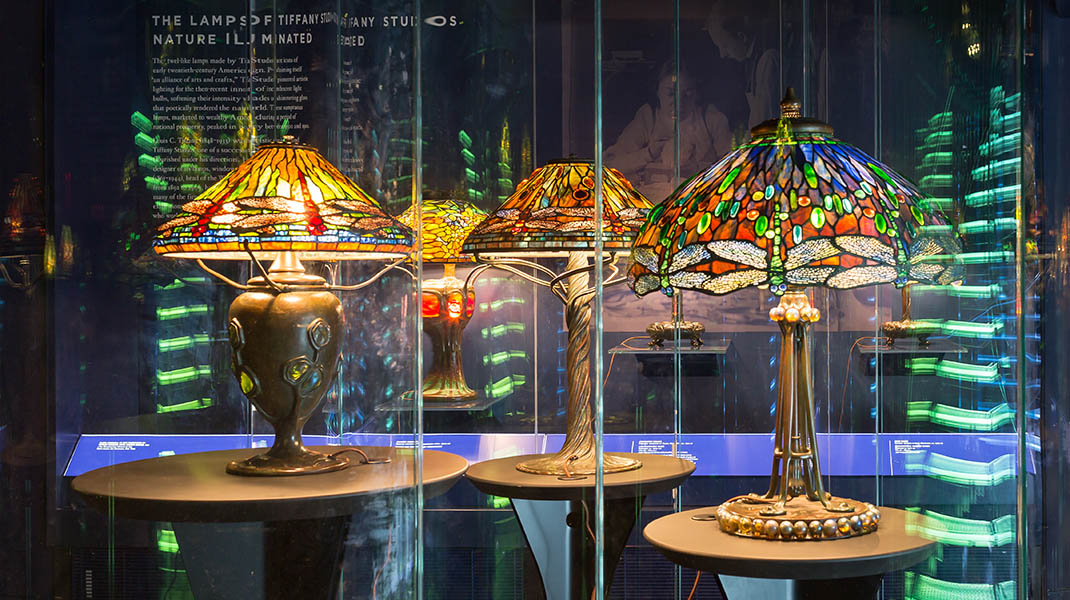 “The New-York Historical Society’s transformed fourth floor features a custom-designed glass gallery showcasing the Museum’s preeminent collection of Tiffany lamps; the groundbreaking new Center for Women’s History, the first of its kind in a U.S. museum; and a reimagined installation of historical artifacts from the Museum’s permanent collection that tell the American story through the lens of New York. The fully renovated fourth floor offers an entirely new visitor experience, full of fresh perspectives on collection highlights, and reveals the often-overlooked stories of women who had an impact on American history.” — New-York Historical Society

“The reopening of our Henry Luce III Center on the fourth floor of our landmark building marks a new and dramatic phase in the evolution of New-York Historical as one of the great showcases for architectural innovation in New York with, among other spectacular features, a bi-level glass Tiffany lamp gallery that is a major feat of design and engineering,” said Dr. Louise Mirrer, president and CEO of the New-York Historical Society. “Virtually every nook and cranny of redesigned space provokes new thinking around the American story. And for the very first time in our city’s history, the key role that New York has played in the nation’s evolution is accorded the place of privilege it deserves. Many of the objects we now are able to display have never been seen by the public before; others have not been seen for generations. With state-of-the-art interactive media, much of which is being introduced to the public for the very first time in our galleries, the visitor experience is dramatic, inspiring, and unique.”

In 2005, the New-York Historical Society discovered the hidden history of Clara Driscoll and her Women’s Glass Cutting Department, who designed and created iconic Tiffany lampshades at the turn of the 20th century.   Photo by Corrado Serra.

The exhibition celebrates Driscoll and her team of “Tiffany Girls,” who worked in anonymity and remained hidden in Louis C. Tiffany’s shadow until the discovery of Driscoll’s correspondence, providing a powerful connection to the adjacent Center for Women’s History.   Photo by Corrado Serra.

The sprawling North Gallery features 15 themed niches that bring together a variety of artifacts and artworks, contrasted with six soaring vertical cases that showcase dense presentations of objects.   Photo by Corrado Serra.

Tablets and touchscreens allow visitors to delve deeper into the stories of objects on view with more than 50 videos and 1,500 images.   Photo by Corrado Serra.

Highlights of the thematic niches, which evoke familiar aspects of urban life through the generations, include artifacts from seminal moments in New York history, such as September 11, 2001 and the Great Fire of 1835.   Photo by Corrado Serra.

Among the 15 themed niches that bring together a variety of artifacts and artworks are those relating to childhood and collecting.   Photo by Corrado Serra.

On view are highlights of the Museum’s collection of early American silver.   Photo by Corrado Serra.

The Hall of American Silver showcases a display of silver and jewelry by the New York retailer Tiffany & Co., including the monumental punch bowl presented by five-and-dime magnate Frank W. Woolworth to architect Cass Gilbert upon the opening of the Woolworth Building in 1913.   Photo by Corrado Serra.

Saving Washington, the inaugural exhibition of the new Center for Women’s History, showcases the contributions of First Lady Dolley Madison and her female contemporaries to the fledgling democracy of early America.   Photo by Corrado Serra.

Dolley Madison was one of the most influential women in America during the nation’s formative years and a powerful force during a time when women were excluded from affairs of state.   Photo by Corrado Serra.

The exhibition illustrates the new Center’s mission: to reveal the often-overlooked stories of women who shaped American history.   Photo by Corrado Serra.

The Gallery of Tiffany Lamps was designed by Czech architect Eva Jiřičná and curated by Margaret K. Hofer, vice president and museum director of the New-York Historical Society, with Rebecca Klassen, assistant curator of material culture. The permanent collection was created by a curatorial team under the direction of Margaret K. Hofer and designed by Gerhard Schlanzky, creative director and director of exhibitions. The new Center for Women’s History is directed and curated by Valerie Paley, vice president and chief historian of the New-York Historical Society, the new Center for Women’s History.