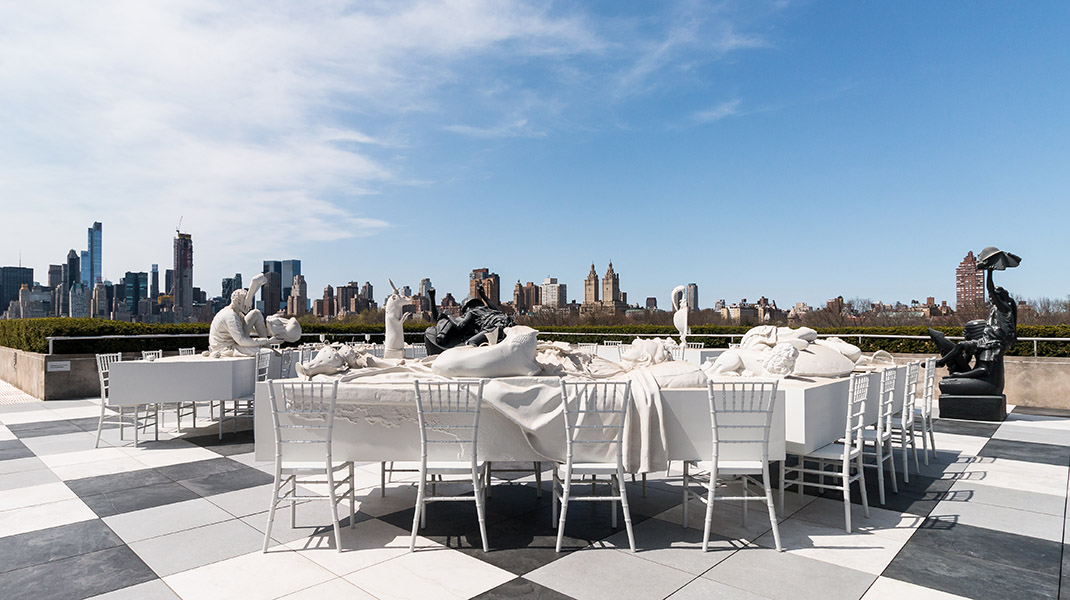 The Met’s history as an institution is a testimony to America’s path as a nation. Its doors opened in 1870 with a large collection of plaster casts of sculptural masterpieces. By the mid-twentieth century, genuine artifacts had displaced the copies. Departments quickly emerged, dividing the cultural endowment into regions and ages, turning a space-time labyrinth into a welcoming, light-filled house for visitors.

The Theater of Disappearance seeks to dialogue with the vision and division of The Met’s patrimony. An entire cartography of human culture seems to emerge from the Museum’s wings and rooms. Rather than a mirror of facts, the Museum becomes a version of them: America’s map of human activity on earth, a scale-model account of who we are and how we got here.

What if we discovered that we are in a labyrinth, not a house? What if every classification and hierarchy created to stabilize the world was erased to produce a deeper insight: that there are no facts but only interpretations, and that the distance between interpretations and facts might be power—the power of an institution or a nation to sanction truth?

Jorge Luis Borges imagined a kingdom so obsessed with cartography that a full-scale map of the kingdom itself was made. When the map’s futility plunged it into disuse, torn pieces, like phantoms, hung from trees and rolled through the windy desert. What if The Met was neither the map nor even its pieces, but instead that windy desert, a scale-model theater of disappearance? — Adrián Villar Rojas

The Roof Garden Commission: Adrián Villar Rojas, The Theater of Disappearance was conceived by Sheena Wagstaff, Leonard A. Lauder Chairman of Modern and Contemporary Art, and curated by Beatrice Galilee, Daniel Brodsky Associate Curator of Architecture and Design, both of The Met’s Department of Modern and Contemporary Art, in consultation with the artist. It is the fifth in a series of site-specific commissions for the outdoor space.