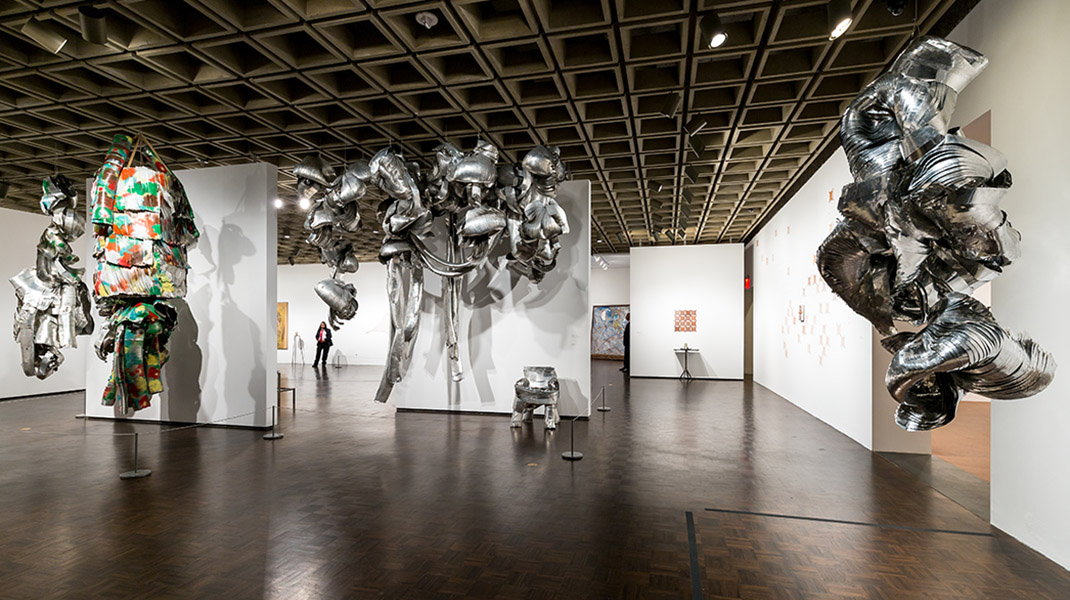 “Over her extraordinary fifty-year career, Marisa Merz (born 1926) has created a deeply personal body of work that exists in the interstices between life and art. In Turin in the 1960s, Merz gained prominence as part of the circle of artists associated with arte povera, an avant-garde movement that opposed Italy’s postwar industrial boom and the material wealth that attended it. The poveristi, who identified with the growing student-led radical movement of the time, favored so-called poor materials but did not adhere to any stylistic code. Merz was revolutionary in her use of unconventional elements, such as aluminum sheeting, copper wire, nylon thread, and unfired clay, as well as in her definitive resistance to titling and dating her work. She was the sole woman in the group, and her relationship to it was one of selective participation.

This exhibition is the first retrospective in the United States for Merz. It opens with her earliest known works, from the mid-1960s: the hanging forms molded out of aluminum sheeting that she called Living Sculpture. After filling her home with them (her kitchen and living room were also her studio), she began to display these sculptures in a number of important gallery exhibitions in 1966–67, following their first public appearance at the socially radical Piper Pluri Club in Turin. With their shining, hard carapaces and curving, organic shapes, these forms are both alien and familiar—part machine, part entrails. They also begin to tell the story of an artist who uses a distinctive iconography to create a contemplative, materially rich, and uncompromising place for herself in the recent history of art in and beyond Italy.” — Introductory Wall Text