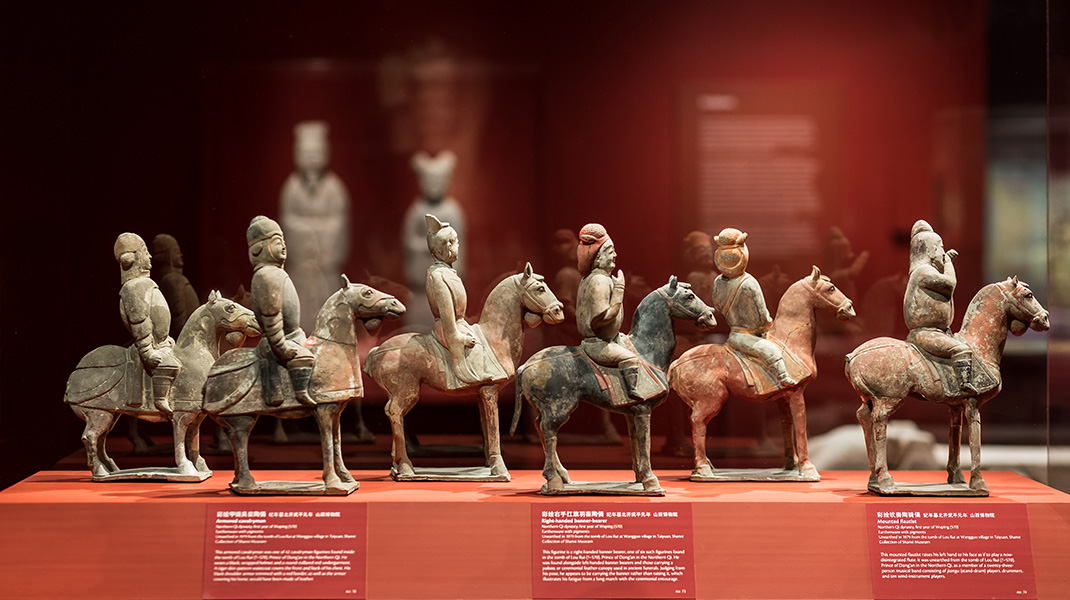 “The Six Dynasties (3rd–6th century) period was a remarkable era in Chinese history. It was a time of chaos, when the land was wracked with civil war, foreign aggression, and violent power struggles. The land was largely fractured into north and south with a quick succession of dynasties in both regions. In the south, there were six Han-Chinese regimes, with Jiankang (present day Nanjing) serving as capital, that have been historically described as the Six Dynasties: Wu, Eastern Jin, Liu-Song, Qi, Liang, and Chen dynasties. The territory north of the Yangzi River came to be controlled mostly by regimes of non-Han ethnicity: the Northern Wei; Eastern Wei and Western Wei, Northern Qi, and Northern Zhou dynasties as well as the so-called Sixteen States.

Despite the tumult, extraordinary cultural and intellectual achievements emerged out of this era. New forms and hybrid styles in creative practice arose along pathways of warfare, commerce, and religion. The perpetual instability of the times compelled many artists, writers, and intellectuals to hone their sensibilities in pursuit of ideal principles. Many found wisdom in the Daoist philosophies of Laozi (ca. 570–470 BCE) and Zhuangzi (ca. 369–286 BCE) which encourage the realization of inner peace through nature and the cultivation of a free spirit above all. In this pursuit, individualism and mastery in creative expression flourished.

Many great artists, especially the calligraphers and painters of the Six Dynasties, are recorded and celebrated in ancient literature, but their works remained relatively unknown to modern audiences. With recent archaeology and research, new evidence of their artistic impact has been revealed. Moreover, new discoveries have tremendously enriched our knowledge of the dynamic intermingling of Han-Chinese and non-Han cultures and customs during this era.(…)” — Introductory Wall Text

Third from right: Celadon Ewer with Chicken-Head Spout and Dragon Handle From a tomb dated to the Northern Qi dynasty, second year of Wuping (571).

Vessel in the Shape of a Man Astride a Beast. Southern Dynasties period (420–589).

Detail: Carved Tomb Panel from Sarcophagus. From a tomb dated to the Sui dynasty, twelfth year of Kaihuang (592). Unearthed in 1999 from the tomb of Yu Hong at Wangguo village in Taiyuan, Shanxi Province West slab of the rear wall.

Detail: Sarcophagus Platform Panel. From a tomb dated to the Sui dynasty, twelfth year of Kaihuang (592). Unearthed in 1999 from the tomb of Yu Hong at Wangguo village in Taiyuan, Shanxi.