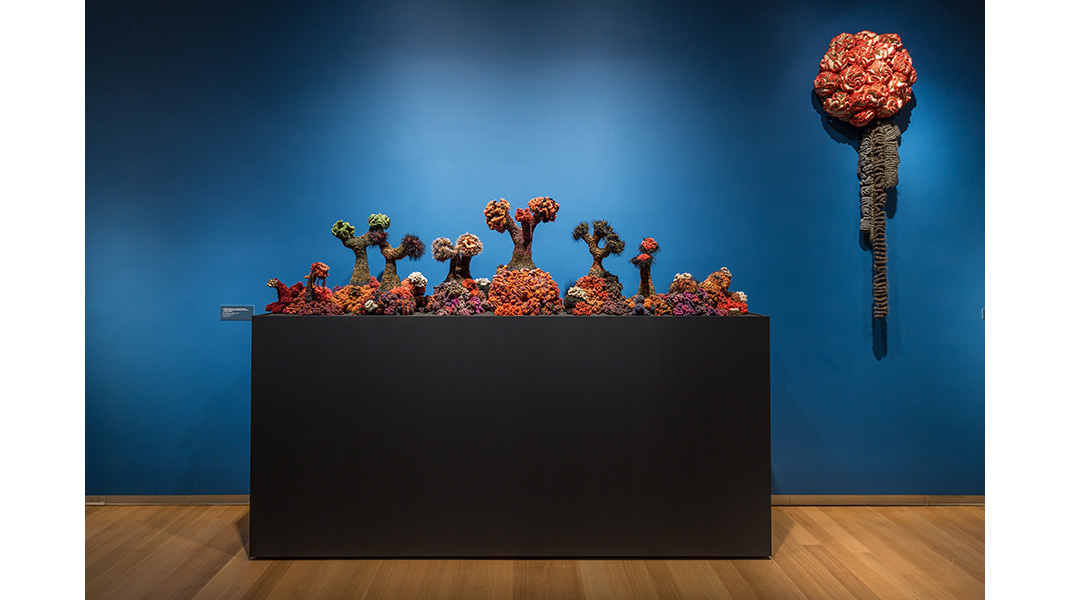 “Crochet Coral Reef: TOXIC SEAS is a community-centered project that builds on the feminist tradition of using craft in the service of activism. Fiber, particularly knitting and crocheting, is often central to this practice because of its traditionally gendered affiliation with ‘woman’s work,’” said De Tillio. “Here, a group comprised primarily of women addresses the startling transformation of the oceans during the Anthropocene era through the Wertheims’ union of science, math, and art, giving voice to the ongoing environmental concerns of climate change and plastic trash in the oceans that haunt our coral reefs.”

“When Christine and I started the project a decade ago, we joked that if the Great Barrier Reef ever died out our crochet reef would be something to remember it by,” said Margaret Wertheim. “Now scientists are saying this might really happen, so the project is racing against time. Time is at the heart of our practice: it takes huge amounts of time to crochet these works, just as it takes huge amounts of time for coral polyps to grow actual reefs. It’s a slow process that can’t be automated or mechanically reproduced. Living reefs, with their immense taxonomic diversity, have evolved over vast stretches of time, and so too the diverse ecology of our crochet reefs results from an ongoing evolutionary process in which our community of contributors continually expands and builds on what’s come before.”

Crochet Coral Reef: TOXIC SEAS is an ongoing project by Margaret and Christine Wertheim and their Los Angeles–based organization, the Institute For Figuring (IFF), which addresses environmental threats to marine life through an ever-evolving handcrafted artificial ecology. For MAD the exhibition was curated by Assistant Curator Samantha De Tillio.