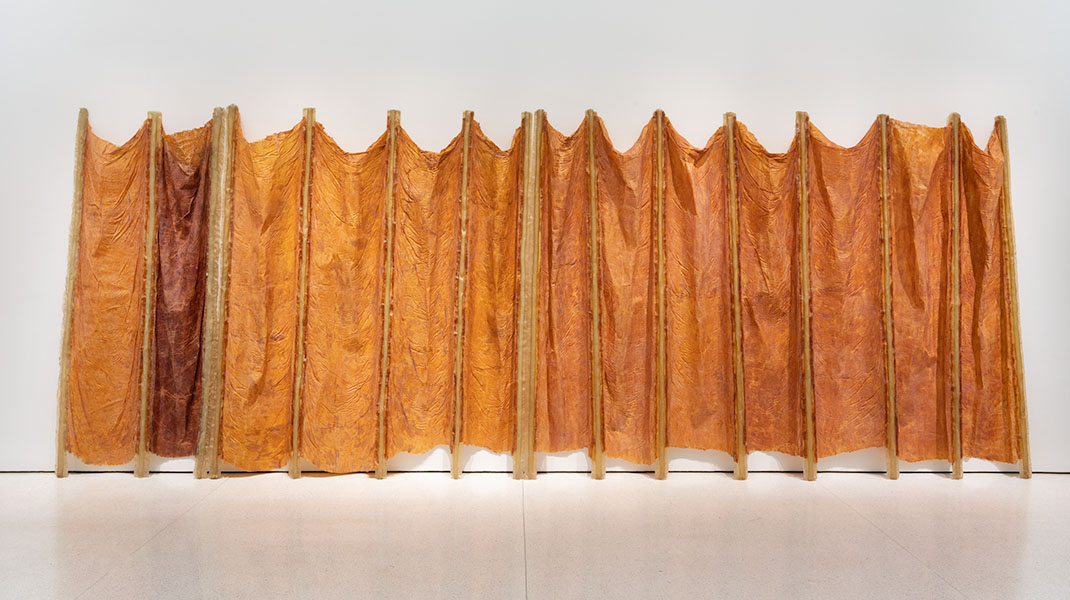 A focused exhibition devoted to influential and experimental artist Eva Hesse (b. 1936, Hamburg, Germany; d. 1970, New York) is on view July 8 through October 16 at the Solomon R. Guggenheim Museum. Eva Hesse: Expanded Expansion is both an examination of the artist’s studio practice and an invitation to explore the transformation and afterlife of a restored monumental work, displayed publicly for the first time in 35 years.” — Guggenheim Museum

“I remember always working with contradictions and contradictory forms, which is my idea also in life, the whole absurdity of life, everything for me has always been opposites, nothing has ever been in the middle. . . . it was always more interesting than making something average, normal, right-size.” — Eva Hesse

“The Solomon R. Guggenheim Museum presents Sensory Poetics: Collecting Abstraction, an exhibition of works acquired over the past ten years that highlights the institution’s growing collection of contemporary art. On view for the first time at the Guggenheim, from July 8 through October 16, the show’s selection reflects developments in painting, sculpture, and video from the 1960s to today that manifest expressive and embodied gestures through the manipulation of color, form, and material and as a response to the constraints of Minimalism.

Representing a cross-section of diverse aesthetic approaches, the featured artists—originating from Europe and the Americas—are inspired by organic processes and natural phenomena, pursue paths of liberation through the abstraction of the corporeal form, or engage with other art forms, including jazz music, classical architecture, and poetry. Sensory Poetics reaffirms the Guggenheim’s commitment to document the expansive legacy of abstraction that is at the core of its history.” — Guggenheim Museum