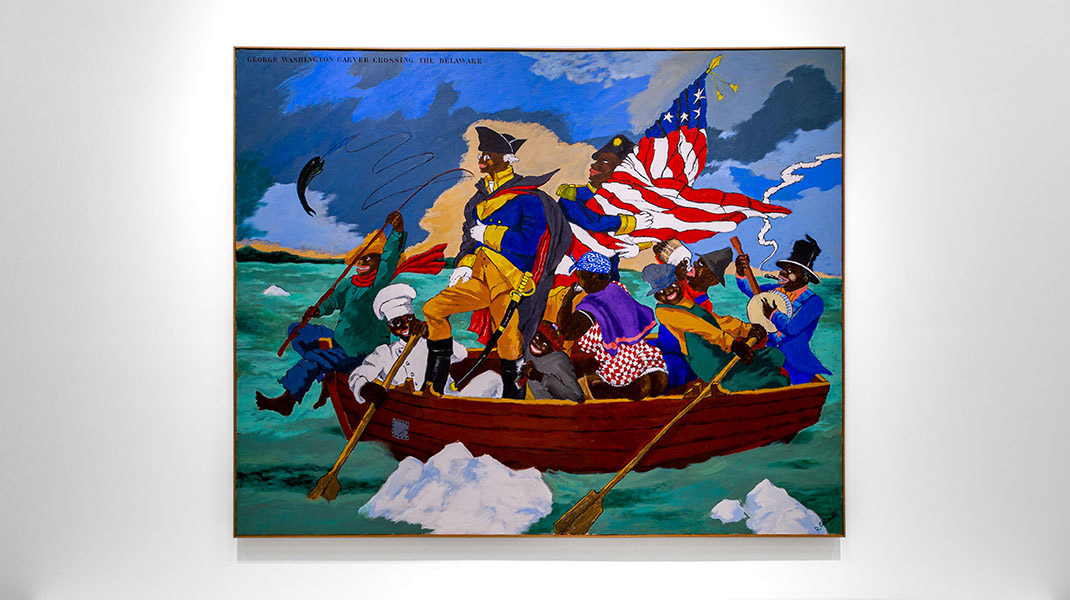 “Art and Race Matters: The Career of Robert Colescott”, through October 9, 2022

“Featuring approximately forty paintings, ‘Art and Race Matters: The Career of Robert Colescott’ highlights the sixty-year-long career of Robert Colescott. Colescott’s bold and richly rendered works traverse art history to offer a satirical take on issues of race, beauty, and twentieth century American culture. Often ahead of his time, Colescott explored the ways in which personal and cultural identities are constructed and enacted through the language and history of painting. He anticipated urgent contemporary discussions around the power of images and shifting political and social values, while asserting the continuing validity of painting as a critical medium for exploring these questions. This exhibition offers a long overdue celebration of Colescott as one of the most consequential artists of his time.” — New Museum

“Art and Race Matters: The Career of Robert Colescott” is co-curated by Lowery Stokes Sims and Matthew Weseley. It is organized by the Contemporary Arts Center, Cincinnati. The presentation at the New Museum is coordinated by Gary Carrion-Murayari, Kraus Family Curator.

“‘Kapwani Kiwanga: Off-Grid,’ is the first New York solo show of work by Kapwani Kiwanga (b. 1978, Hamilton, Canada). Over the past decade, the Paris-based artist has created complex installations, sculptures, performance lectures, and films that consider myriad subjects including marginalized histories and systems of power. Drawing on her training in anthropology and the social sciences, Kiwanga’s rigorously researched projects often take the form of installations that stage new spatial environments while exposing the ways in which bodies physically experience and inhabit structures of authority and control.” — New Museum

“‘Bárbara Wagner & Benjamin de Burca: Fives Times Brazil,’ the first survey exhibition in the United States featuring works by Bárbara Wagner (b. 1980, Brasília, Brazil) and Benjamin de Burca (b. 1975, Munich, Germany). Working together for a decade, the duo produces films and video installations that feature protagonists engaged in cultural production, collaborating with nonactors to make their films—from writing scripts to staging performances on camera. The resulting works are marked by economic conditions and social tensions present in the contexts in which they are filmed, giving urgency to new forms of self-representation through voice, movement, and drama.” — New Museum

“’Doreen Lynette Garner: REVOLTED,’ a solo presentation of new works by Doreen Lynette Garner (b. 1986, Philadelphia, PA), whose practice exposes the histories and enduring effects of racial violence in the United States through the frameworks of medicine and pathology by examining past and present examples of experimentation, malpractice, and exploitation enacted upon Black people. Drawing parallels to contemporary forms of displacement and neo-imperialism, her latest projects survey the forced spread of viruses and diseases to Indigenous lands in the Americas from Europe via the transatlantic slave trade and colonization.” — New Museum