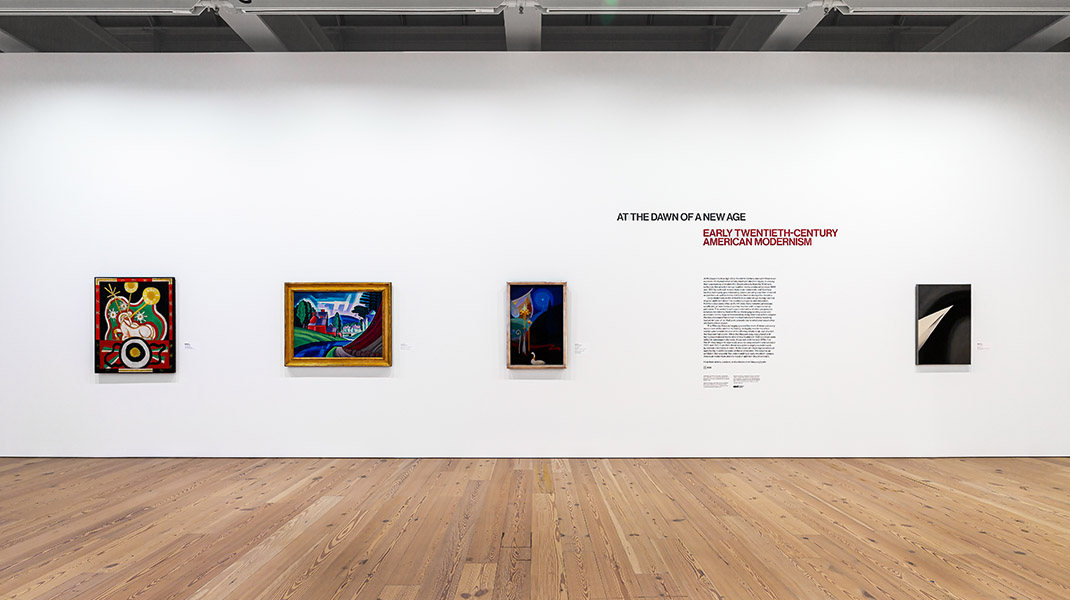 “At the Dawn of a New Age: Early Twentieth-Century American Modernism brings together works by lesser-known modernists and familiar icons, created between 1900 and 1930. It uncovers how these artists used abstraction and responded to the realities of a rapidly modernizing world. Featuring artworks drawn primarily from the Whitney’s collection, including new acquisitions and rarely seen works, the exhibition represents over 60 works by more than 45 artists working in various styles and media, including paintings, drawings, sculptures, prints, photographs, and woodcuts. At the Dawn of a New Age offers a broader perspective on early twentieth-century American modernism by including groundbreaking, historically overlooked artists like Henrietta Shore, Charles Duncan, Yun Gee, Manierre Dawson, Blanche Lazzell, Ben Benn, Isami Doi, and Albert Bloch in addition to well-known artists like Marsden Hartley, Oscar Bluemner, Elie Nadelman, Charles Burchfield, Aaron Douglas, and Georgia O’Keeffe.” — Whitney Museum of American Art

Installation views of At the Dawn of a New Age: Early Twentieth-Century American Modernism at Whitney Museum of American Art. Photos by Corrado Serra.

“In the Whitney’s early days, the Museum favored realism over abstract styles,” said Curator Barbara Haskell. “It wasn’t until the mid-1970s that the Museum expanded its focus and began acquiring nonrepresentational works from the period. Gaps remain, but the Museum’s holdings of early twentieth-century modernism now rank among the collection’s strengths. By bringing together familiar icons, works that have been in storage for decades, and new acquisitions, At the Dawn of a New Age gives us an opportunity to reassess how we tell the story of this period of American art and celebrate its complexity and spirit of innovation.”

At the Dawn of a New Age: Early Twentieth-Century American Modernism is organized by Whitney Curator Barbara Haskell.