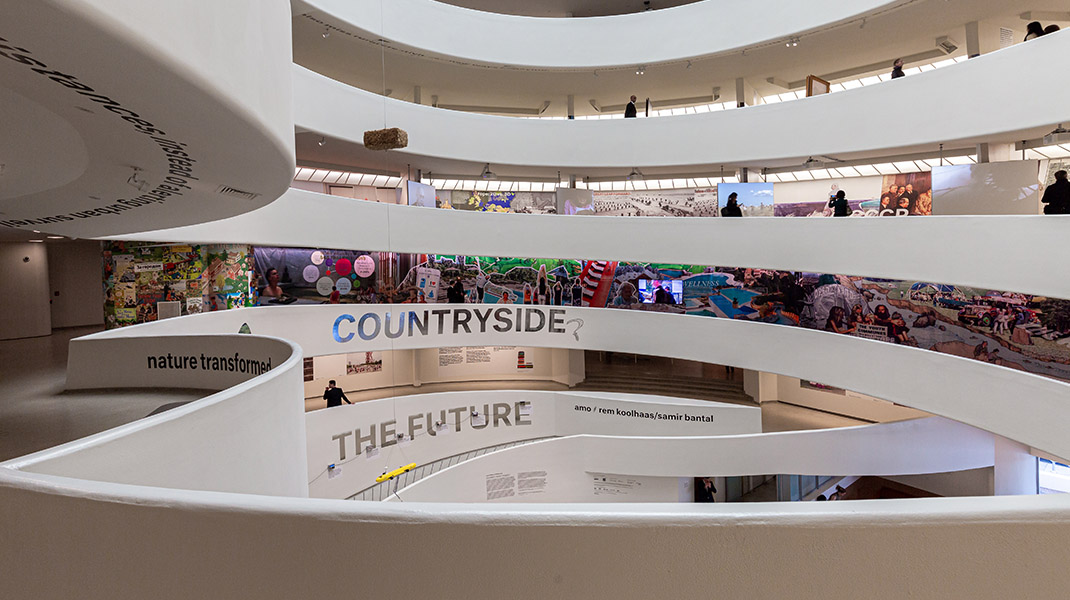 “The Solomon R. Guggenheim Museum presents Countryside, The Future, an exhibition addressing urgent environmental, political, and socioeconomic issues through the lens of architect and urbanist Rem Koolhaas and AMO, the think tank of the Office for Metropolitan Architecture (OMA). A unique exhibition for the Guggenheim rotunda, Countryside, The Future explores radical changes in the vast nonurban areas of Earth with an immersive installation premised on original research. The project extends investigative work already underway by AMO, Koolhaas, and students at the Harvard Graduate School of Design; the Central Academy of Fine Arts, Beijing; Wageningen University, Netherlands; and the University of Nairobi.

The exhibition explores artificial intelligence and automation, the effects of genetic experimentation, political radicalization, global warming, mass and micro migration, large-scale territorial management, human-animal ecosystems, subsidies and tax incentives, the impact of the digital on the physical world, and other developments that are altering landscapes across the globe.” — Solomon R. Guggenheim Museum

“In the past decades, I have noticed that while much of our energies and intelligence have been focused on the urban areas of the world—under the influence of global warming, the market economy, American tech companies, African and European initiatives, Chinese politics, and other forces—the countryside has changed almost beyond recognition,” stated Koolhaas. “The story of this transformation is largely untold, and it is particularly meaningful for AMO to present it in one of the world’s great museums in one of the world’s densest cities.”

Installation views of Countryside, The Future. Photos by Corrado Serra.