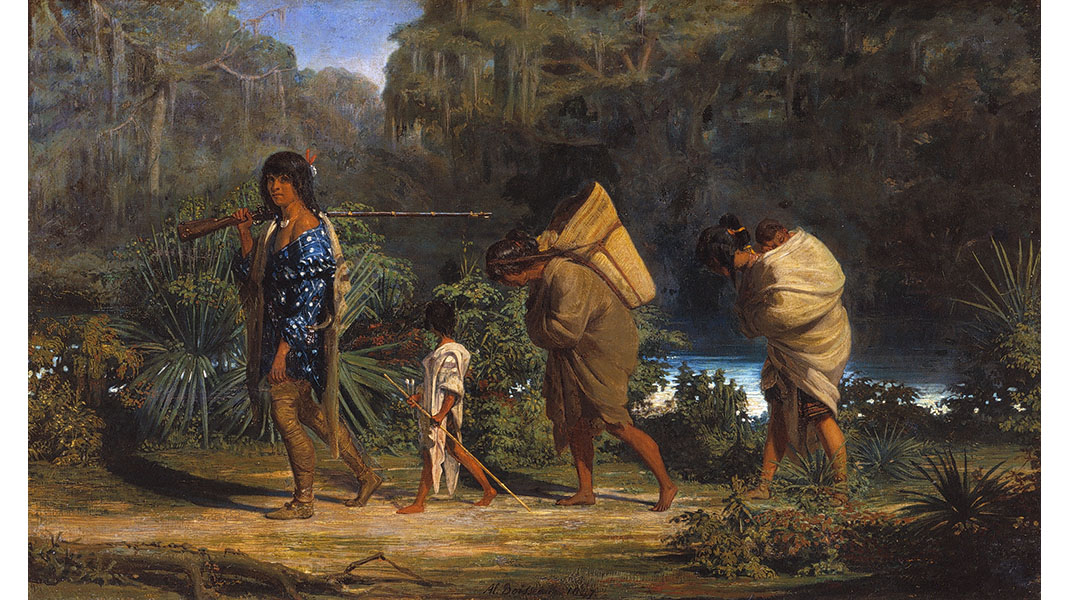 From the early 19th century onwards, Louisiana’s dense forests and tangled, impenetrable swamplands—branded as Acadie, or Acadia—came to represent America’s fascination with untamed wilderness. In Louisiana, artists encountered a landscape utterly unlike the Northeastern forests and mountains around which the very idea of the American landscape had been formed. Louisiana drew painters from France, New York, Boston, Mexico and the Caribbean, who made the region a testing ground for new ideas about landscape representation. This resulted in landscape paintings that brought American art into conversation with a new type of terrain, as well as a more international set of artistic and cultural references. Far from a regional phenomenon, Inventing Acadia shows how Louisiana landscape painting was part of a national–and even international–landscape conversation.” — NOMA

George David Coulon, Spirit of Louisiana, 1894, Oil on canvas, 44 x 27 inches, Gift of the Fine Arts Club of New Orleans on the occasion of their 60th Anniversary, New Orleans Museum of Art, 76.69

Inventing Acadia: Painting and Place in Louisiana is accompanied by a site-specific contemporary art installation in NOMA’s Great Hall by the artist Regina Agu, created in partnership with A Studio in the Woods, through an artist residency. For her project, Agu created a large-scale photographic panorama that wraps the museum’s Great Hall, based on her experiences revisiting the sites of many of the historical landscape paintings in the exhibition.

Inventing Acadia: Painting and Place in Louisiana is organized by the New Orleans Museum of Art.