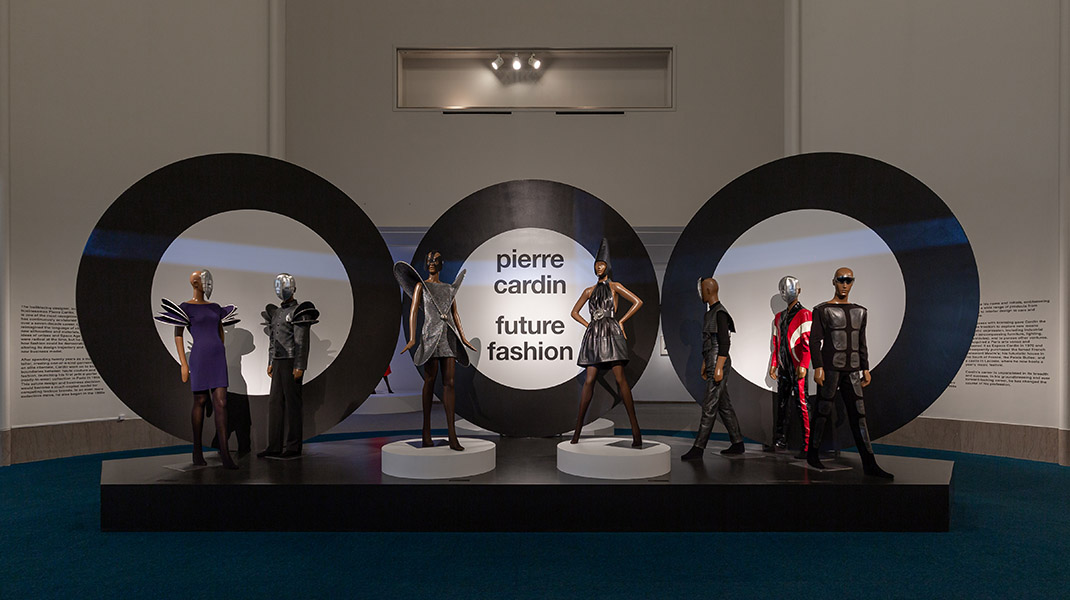 “Pierre Cardin: Future Fashion traces the legendary career of one of the fashion world’s most innovative designers, one whose futuristic designs and trailblazing efforts to democratize high fashion for the masses pushed the boundaries of the industry for more than seven decades. The retrospective exhibition features over 170 objects that date from the 1950s to the present, including haute couture and ready-to-wear garments, accessories, photographs, film, and other materials drawn primarily from the Pierre Cardin archive. Pierre Cardin: Future Fashion, curated by Matthew Yokobosky, Senior Curator of Fashion and Material Culture, Brooklyn Museum, will reveal how the designer’s bold, futuristic aesthetic had a pervasive influence not only on fashion, but on other forms of design that extended beyond clothing to furniture, industrial design, and more.

Pierre Cardin (French, b. 1922) is best known for his avant-garde Space Age designs and pioneering advances in ready-to-wear and unisex fashion. Cardin’s fascination with new technologies and the international fervor of the 1960s Space Race visibly influenced his couture apparel, which subsequently became emblematic of the era. His clothing designs, which featured geometric silhouettes and were often made from unconventional materials, were worn by international models and film stars from Brigitte Bardot and Lauren Bacall to Alain Delon, Jacqueline Kennedy, and Raquel Welch. Fueled by an appetite for experimentation and ‘breaking the mold,’ he was one of the first European designers to show in Japan, China, and Vietnam and license his name, using it to brand an expansive line of products on a global scale.” — Brooklyn Museum

“Throughout his decades-long career, Pierre Cardin has proved to be a master tailor and designer, as well as an intuitive businessman,” says Matthew Yokobosky, Senior Curator of Fashion and Material Culture, Brooklyn Museum. “He truly is a twentieth-century renaissance man whose work has advanced fashion and design while continuously giving society a new and breathtaking vision of what the future might look like.”