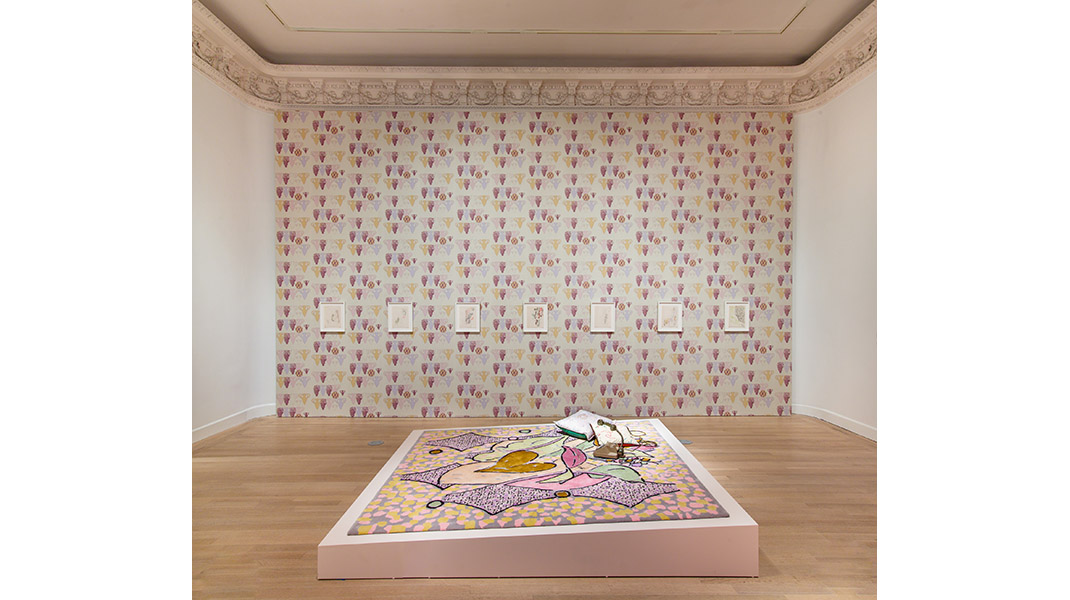 “Marc Camille Chaimowicz’s pluralistic practice encompasses painting, drawing, collage, book making, sculpture, and installation as well as ceramics, furniture, lighting, textiles, and wallpaper. He emerged as an artist in the early 1970s with groundbreaking performative installations that infused everyday life with art and politics and stood at the intersection of the gay liberation and feminist movements. In the years that followed, he moved his artistic activities into his home, an inward turn that is the starting point for Your Place or Mine . . . . This slyly provocative title positions the exhibition as a temporary connection between visitor and artist, who extends an invitation to enter his world.

Chaimowicz’s artworks, made between 1978 and the present, are arranged to evoke a series of places: a home, library, and park. In these spaces, interiority and conviviality, private contemplation and sociability are commingled, at odds, and in flux. He challenges dichotomies, pivoting between fine art and design, public and private, masculine and feminine, past and present.

The Jewish Museum building was originally a family home. Its once-lived-in rooms, with their ornamental flourishes, offer the perfect setting for an artist preoccupied with the psychological, imaginative dimensions of domestic spaces, objects, and rituals. These act as source and subject of his work, which brings value to decoration, intimacy, and the interior life of the artist.

Chaimowicz was born in postwar Paris. His Polish Jewish father, a mathematician at the Institut Curie, survived the Nazi Occupation of France, but never spoke of that time. His French Catholic mother was a seamstress for the couturier Pacin. In pursuit of new beginnings, the family moved to England when Chaimowicz was eight years old, eventually settling in London. He finally returned to Paris in May 1968 to witness the student uprisings there, events that shaped his career. He enfolds his rebelliousness in beauty, one ofmany dualities that he fluidly negotiates and that resonates across his life and work.” — Introductory Wall Text by Kelly Taxter, Associate Curator

Installation views of the exhibition Marc Camille Chaimowicz: Your Place or Mine…, March 16 – August 5, 2018, The Jewish Museum, NY. Photos by: Jason Mandella

Marc Camille Chaimowicz: Your Place or Mine… is organized by Kelly Taxter, Associate Curator, The Jewish Museum, in association with the Serpentine Galleries, London. The exhibition is designed by New Affiliates (Jaffer Kolb, Ivi Diamantopoulou).