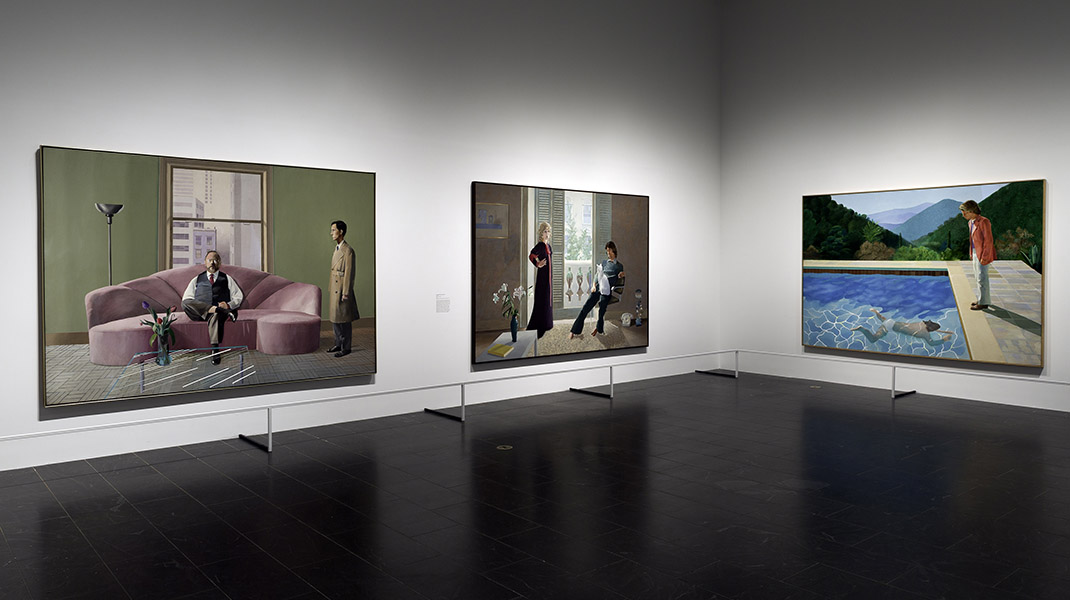 “For nearly sixty years, David Hockney (British, born 1937) has explored how to translate movement, space, and time into two dimensions, working across a wide range of media with equal measures of wit and intelligence. From his earliest engagements with modernist abstraction to his most recent, jewel-toned landscapes, Hockney has continued to challenge the protocols of picture-making, investigating the nature of vision and representation with both intellectual rigor and sheer delight in the act of looking.

Born in West Yorkshire, he moved to London in 1959 to study at the Royal College of Art. Upon graduation, Hockney had already garnered a national reputation. He left in 1963 for an auspicious visit to Southern California, where he has lived on and off for the past fifty years. Hockney’s willingness to flaunt conventions both societal and artistic has distinguished his career on both sides of the Atlantic. His works from the 1960s brazenly reference homoerotic subject matter, while his enduring dedication to figuration runs against the grain of predominant art-world trends.

Hockney is perhaps best known for his luminous depictions of California swimming pools and backyards in the mid-1960s. His paintings in the years that followed demonstrate an interest in social relations, and his experiments with illusion and realism reveal his rebellion against onepoint perspective. In recent years he has ventured outdoors to paint the changeable landscapes of his native Yorkshire, while simultaneously embracing new technologies such as the iPad, with its digital drawing tools. Now eighty years old, Hockney has returned again to Los Angeles and still paints daily. This exhibition assembles six decades of masterpieces from the artist’s career, including one finished just this past spring, in the fullest presentation to date.” — Introductory Wall Text

David Hockney is organized collaboratively by Tate Britain, London; the Centre Pompidou, Paris; and The Metropolitan Museum of Art, New York. At The Met, David Hockney is curated by Ian Alteveer, Curator, with assistance from Meredith Brown, Research Associate, both in the Department of Modern and Contemporary Art.