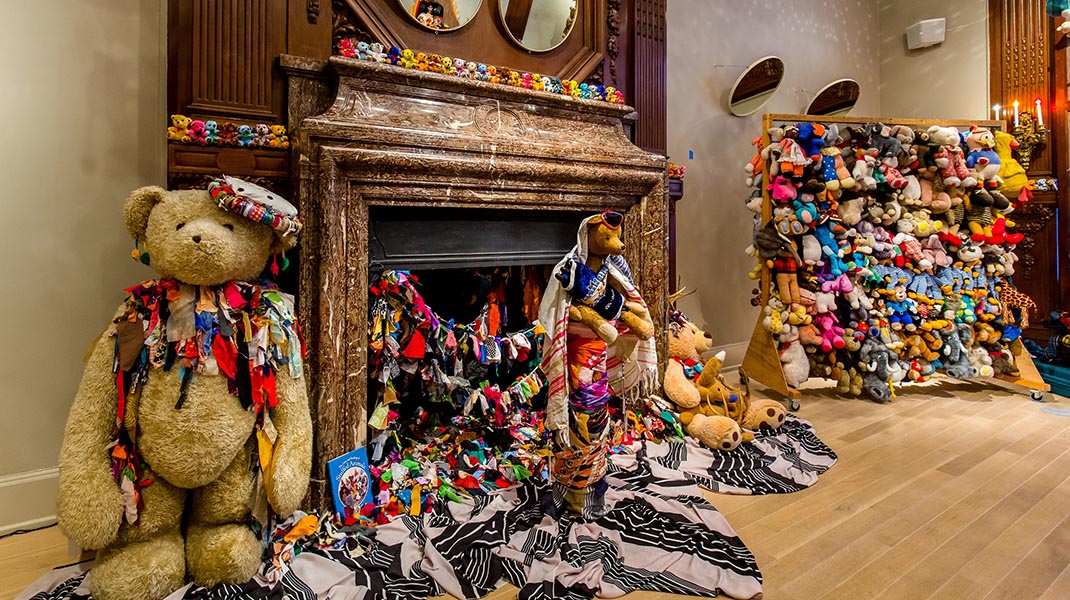 “The colorful, fantastical world of visual artist, musician, composer, and performer Charlemagne Palestine (b. 1947, Brooklyn, New York) arrives at the Jewish Museum with an immersive installation influenced by childhood experience and by the artist’s Brooklyn Jewish roots. Charlemagne Palestine’s Bear Mitzvah in Meshugahland features hundreds of plush toys, including teddy bears, which the artist regards as shamanic representations of the soul. This is the first U.S. museum exhibition of the artist’s monumental plush toy installations.

The teddy bear’s invention in 1902 by an immigrant Jewish couple in the same Brooklyn neighborhood where Palestine was born has become a near obsession for the artist. The first bear was hand sewn by Morris and Rose Michtom as a tribute to President Theodore Roosevelt following his much publicized hunting trip during which he refused to shoot a bear cub that had been readied for his aim. The incident was popularized by the prominent illustrator Clifford Berryman’s cartoons in the Washington Post. The Michtoms, along with the rest of America, became fascinated by the story and thus dubbed the newly invented toy “Teddy’s bear.” The bear’s invention quickly became a commercial and media success.” — The Jewish Museum

“There was never anything minimal about my style. If anything, I invented maximalism.” Charlemagne Palestine