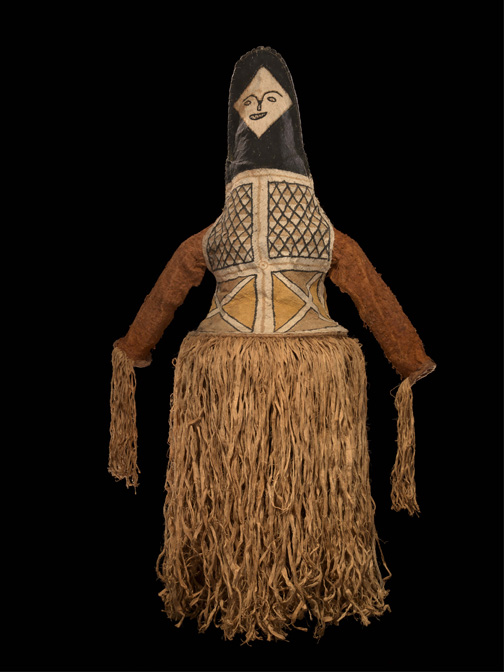 Hunkpapa Lakota Northern Traditional Dance Regalia (United States). This Northern Traditional Dance regalia was made and worn by Robert Tiger, Jr. (Hunkpapa Lakota). Warriors in full ceremonial regalia decorate the front panels of the vest. The figures are Tiger’s ancestors, four brothers who fought in the Battle of the Little Big Horn: Chief Mad Bear, Low Thunder, Elk, and Walks with the Wind. Directly inherited from the regalia of the old warrior societies is the porcupine-head broach, a crest made of stiff porcupine guard hair with a layer of dyed deer hair in the center. Photo by Ernest Amoroso

Mapuche Mütrüm Purun Regalia (Chile). Mapuche women wear traditional dress for ritual dances. The chamal or kepam is a square or rectangular cloth that is wrapped around the body and pinned over one shoulder, leaving the other shoulder bare if a blouse is not worn. With it is worn a trarihue, or belt, ikulla, black shawl, and a colorful apron. A silver breast ornament is always part of a Mapuche woman’s traditional attire, as are silver earrings and a silver headband. Her hair ribbons are rich in symbolism: blue ribbons represent the sky; yellow represent the sun; green represent the fertility of the land; and red represent power. Photo by Ernest Amoroso

Yoreme Pajko’ora Dance Regalia (Mexico). Yoreme pajko’ora dancers wear a white blanket, or manta, wrapped around their waist and legs, and a long-sleeved white shirt. The white clothing represents purity. Pajko’ora dancers also wear long strings of pebble-filled Giant Silk Moth cocoons wrapped around their legs. The sound made by the leg rattles resembles that of a rattlesnake, which is associated with rain and fertility. Photo by Ernest Amoroso