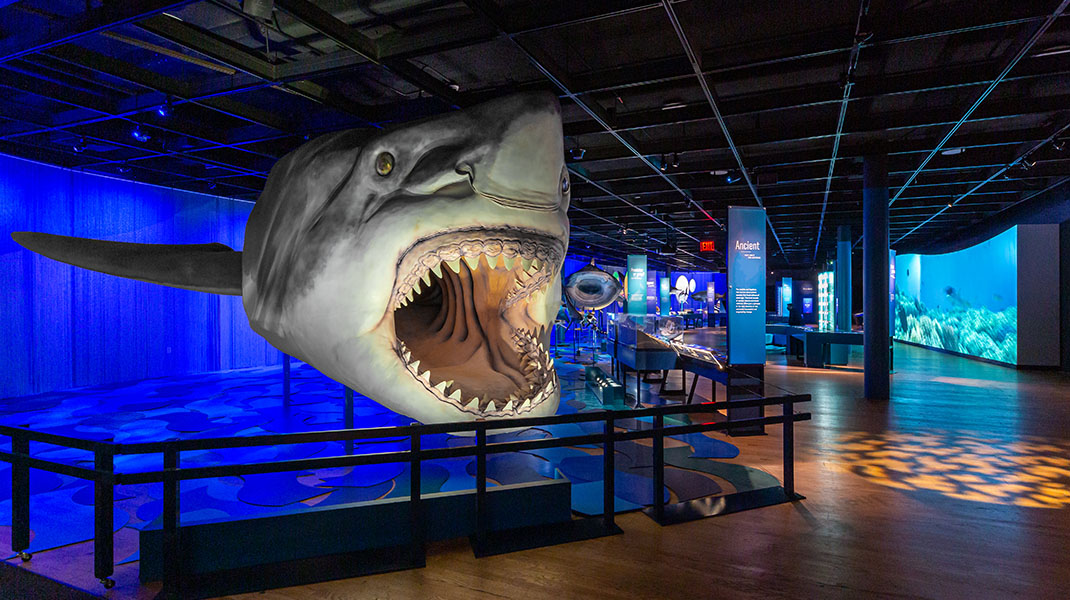 “People have been fascinated by sharks for as long as we have been exploring the oceans. Fixed in the public imagination as toothy, fearsome predators, sharks are far more fascinating, and more complex, than their depiction in popular culture. Sharks, a new exhibition opening at the American Museum of Natural History this winter, will bring to life the incredible diversity of this ancient group of fishes and will offer visitors a unique look at pre-historic and modern shark species, their habitats and hunting styles, and the conservation threats these magnificent animals are facing today.

Visitors to Sharks will explore the diversity, anatomy and behavior of sharks and their close relatives through encounters with tiger sharks, great whites, and other familiar favorites along with little-known creatures such as the torpedo ray, the longnose chimaera, and the tiny dwarf lantern shark, which glows in the dark and is small enough to hold in your hand. The exhibition will showcase fossils from the Museum’s extensive collections, current Museum research, and a spectacular ‘parade’ of sharks highlighting the diversity of ancient and modern shark species through 30 lifelike models that range from 33 feet to 5 inches long, including the prehistoric megapredator megalodon, the ‘Tyrannosaurus rex of the seas,’ which was so large it preyed on whales. Other exhibition highlights include an interactive that challenges visitors to hunt like a hammerhead and touch-free media that reveals distinctive shark traits with the wave of a hand. Sharks also delves into the serious conservation issues facing sharks today, including overfishing and habitat destruction, demonstrating that while these amazing animals pose few threats to people, we represent a serious danger to them.” — American Museum of Natural History

Sharks is curated by John Sparks, curator in the Museum’s Department of Ichthyology in the Division of Vertebrate Zoology. Sharks has also drawn on the expertise of John Maisey, curator-in-charge emeritus, fossil fish, Division of Paleontology.