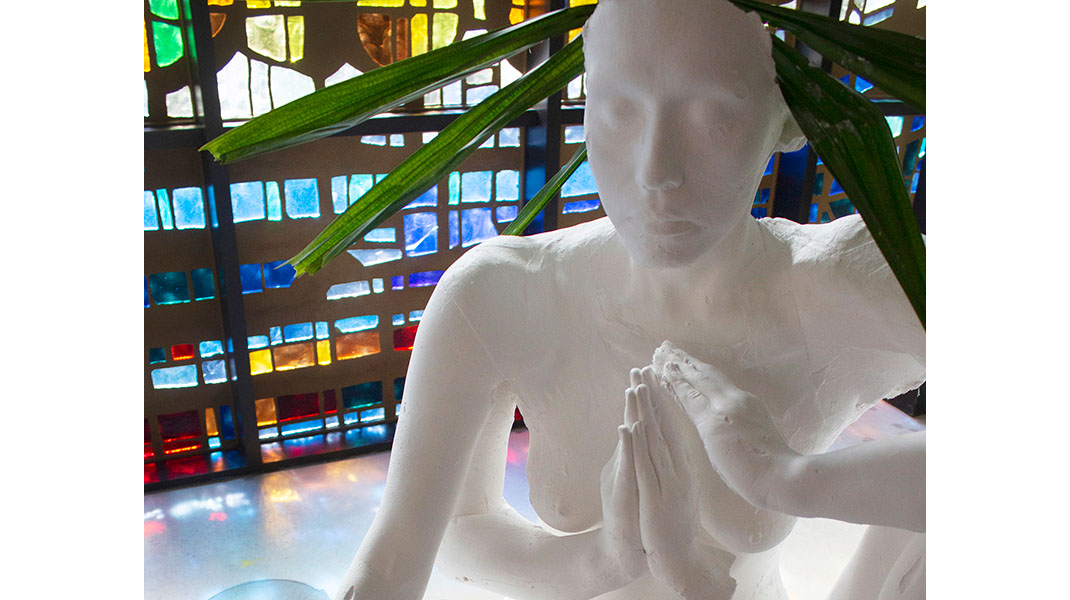 “Priscilla Aleman transforms the Sunroom into a devotional environment that references the body as an innate, recurring symbol used in ceremonies to convey the sacred, the afterlife and the deities of our time. In an homage to traditional sculptures and ancient symbolism, Aleman examines material culture and ecological transformations in the Americas, creating sites for ritualized performances and spiritual contemplation. Citing the ocean as a connective tissue, Origins of Devotion speculates about historic and imagined moments of contact between peoples of the Global South, bringing together materials collected from related regions, including belongings from Aleman’s Caribbean family members, replicas of pre-Columbian artifacts and tropical flora from various horticultural facilities, including Wave Hill.” — Wave Hill

“Having worked closely with Priscilla on this project for almost two years, I found it compelling to see how the installation evolved as she honed in on the social, cultural, physical and spiritual interconnections between humans and the land, more specifically teasing out connections to Yemaya, a water goddess in African diasporic cultures. Discussions with Wave Hill’s horticulturalists about the Aquatic and Monocot gardens further informed Aleman’s incorporation of water elements and tropical plants, such as the banana leaf, into her,” says Jeng Lynch.

An acclaimed public garden and cultural center in the Bronx, Wave Wave Hill’s landscape serves as a catalyst for emerging artists exhibiting in its Sunroom Project Space. The 2021 season’s seven installations round out with Priscilla Aleman’s Origins of Devotion. Aleman will also participate in an onsite “Meet the Artist” talk with Eileen Jeng Lynch, Wave Hill’s Curator of Visual Arts.