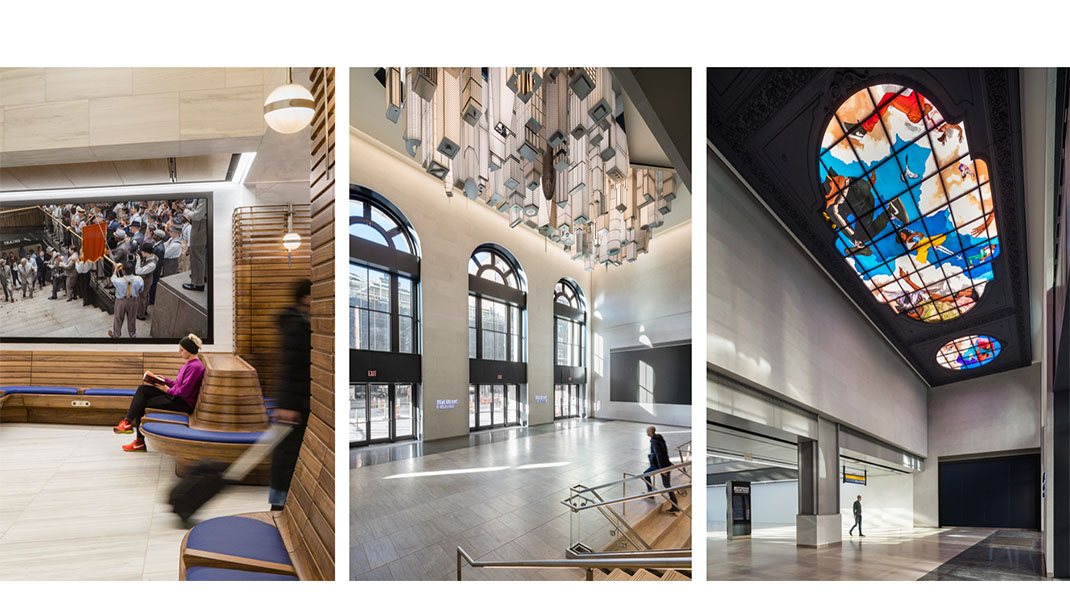 “The new Moynihan Train Hall opened January 1st, along with three unprecedented site-specific art installations by Stan Douglas, artist duo Elmgreen & Dragset, and Kehinde Wiley, counted among the most innovative and revered artists working today. As part of Governor Cuomo’s visionary transformation of the nation’s busiest transportation hub, the artworks were commissioned through a partnership between Empire State Development (New York State’s economic development agency) and Public Art Fund (the leading non-profit that commissions and presents art in public spaces). A testament to New York’s creativity, diversity, and richly layered heritage, the three monumental commissions complement the new cutting-edge Train Hall, while embracing its civic character. Offering the public a fresh perspective on the history and grandeur of the original Pennsylvania Station and James A. Farley Post Office, Douglas’s, Elmgreen & Dragset’s, and Wiley’s installations bring a sense of wonder and humanity to these public spaces, and will evoke civic pride and delight for generations to come.” — Public Art Fund

“Nothing could be more fitting for a great metropolitan transit hub than three astonishing works of art that stop us in our tracks. Each one dazzles with its sheer beauty, epic scale, and technical mastery. Collectively, they also remind us that great art comes from great ideas,” said Nicholas Baume, Director & Chief Curator of Public Art Fund. “Each artist has thought deeply about the history, context, significance, and future of this newly transformed place, creating brilliantly innovative works of art that allow us to see ourselves—past, present, and future—in a truly civic space.”

Stan Douglas (b. 1960 in Vancouver, Canada). Penn Station’s Half Century, 2020. A series of nine photographic panels on view in the seating alcoves of The Ticketed Waiting Room adjacent to the main concourse.