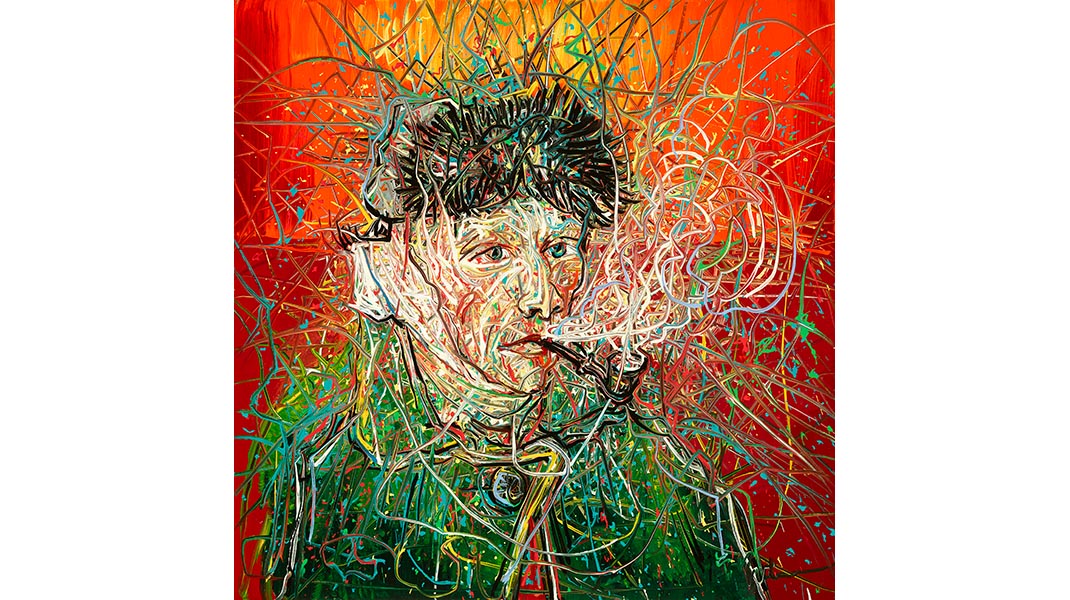 Zeng has already exhibited in the Metropolitan Museum of Art, the Musée d’Art Moderne de la Ville de Paris, the National Art Museum of China and Musée du Louvre and – especially for the Van Gogh Museum – has now made a set of six paintings inspired by Van Gogh’s self-portraits.

Three of these portraits are on display in the Van Gogh Museum, along with a painting of Zeng’s shoes (Boots) and a huge, impressive work measuring 200 x 350 cm inspired by Van Gogh’s masterpiece Wheatfield with Crows. Zeng’s new work will be shown to the public for the first time in the feature exhibition on the third floor of the Van Gogh Museum.

We experience Van Gogh’s self-portraits, shoes and wheatfields in a different way through Zeng’s eyes. He combines his own style with the work of Vincent van Gogh in a swirling pattern of lines that reflects the tradition of Chinese calligraphy. Zeng Fanzhi gets us to look at and think about Van Gogh’s work, about his brushstrokes, his use of colour and his artistic vision. Zeng says of Van Gogh, ‘he has become a legend in my heart’.” — Van Gogn Museum

Axel Rüger, Director of the Van Gogh Museum, says, ‘Zeng Fanzhi | Van Gogh fits into a series of feature exhibitions of modern and contemporary art in the Van Gogh Museum that show the influence Van Gogh had on the generations that followed him. This exhibition shows that Van Gogh is still a source of inspiration to this day. We are extremely honoured that Zeng Fanzhi has made these works for the museum and we are particularly proud of the end result.’

Zeng Fanzhi | Van Gogh was made in close collaboration with the Fanzhi Foundation and the artist’s studio team.